Horary astrology was called in earlier times “the doctrine of interrogation”. It was designed to allow answers to a very specific questions, that cannot be addressed so accurately with other astrological techniques. This technique relates to the moment the question is asked and can deliver amazingly accurate insight that help to evaluate future developments. However, it is important to remember, that horary astrology is not in any way a fatalistic branch of astrology. The decision what to do and how to proceed stays as always with the person that asks the question. Horary horoscope can give us useful considerations for making decisions. In this post I want to demonstrate the power of horary astrology. You can read about the difference between horary astrology and annual astrological forecast by following the link in this sentence.

Will I get this job?

This question referred to a planned job change where the client had just applied for a new job that would involve a higher position within a company. The client also knew that there were a number of applicants for the same position. So she decided to ask if she will get this job, and if so, if it will be good for her. The background of the question was her dissatisfaction with her than current job, because she wanted to achieve more, but so far there were no opportunities for that. 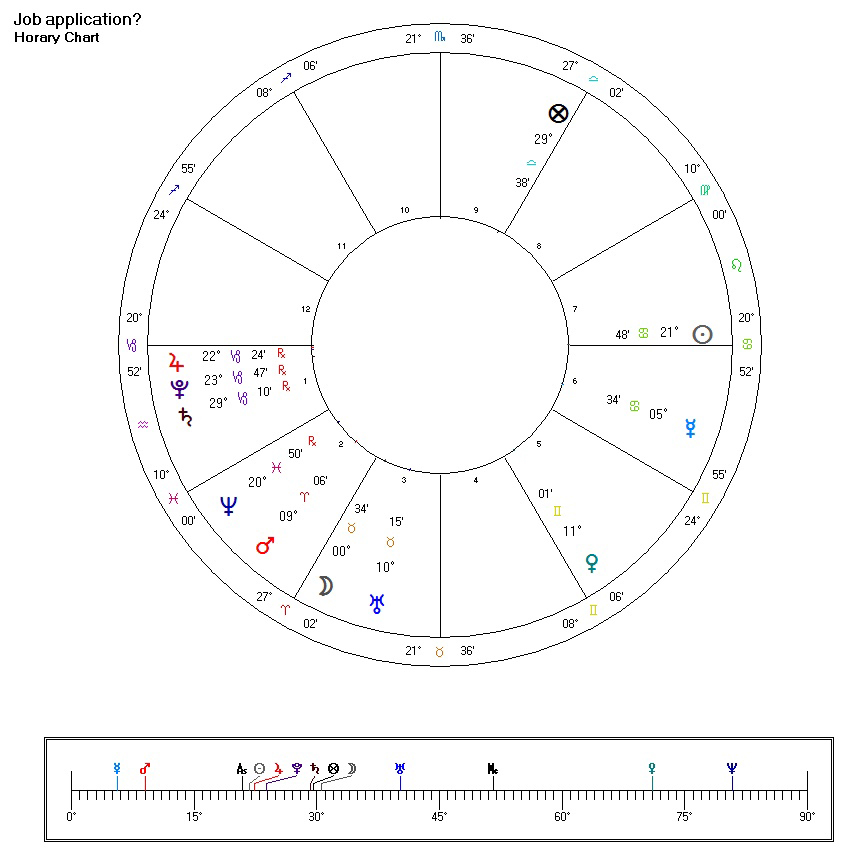 In this horoscope the client is represented by the retrograde Saturn in Capricorn in the 1st house, together with Pluto and essentially debilitated Jupiter. The significator of the job that the client applied to is Mars in Aries in the 2nd house.  Moon at 0 degrees Taurus is in the sign of its exaltation and it is slow.  Saturn, the significator of the client, approaches the opposition with Sun. This applying Saturn - Sun opposition describs a linked relevant question of the client, that I will not address here. Mars, the significator of the job applied for, is in the sign Saturn’s detriment. Moon will apply with sextile to Mercury in the 6th house and then it will conjunct the Uranus.

Picture of the situation

The astrological factors paint the following picture: The application has just been submitted and the selection process will take a long time. The client confirmed, that it may last several months. The job is a well-paid one, the client is very likely to be seen as suitable for the job by the potential future employer. But it can happen that she may not like the  job anymore when she learns more about it.

This horoscope also shows a client with significant frustration related to her current situation which is a motivation for the job change. Also, some questions may need to be resolved first before moving on to change jobs. It would be a good idea to explore which areas need reassessment, as this can give her a different understanding of her situation, and she may even change her priorities. That the client could change her mind regarding the new job, is suggested by all the retrogradation in the 1st house and by the Moon’s application to Uranus.

The resolution: The client was actively taking part in the selection process which lasted for few months and she got to the last round. Than she realized that she does not like that job, that it will not suit her personal private situation and decided to stay with her old company.

Should we agree to take this apartment?

The question was asked at the beginning of the Corona crisis. Two young students were looking for an apartment to rent and share. Their parents were involved in the search because they were supposed to pay the rent. The parents with their adult children had visited some apartments together and they had an appointment to visit another apartment exactly on the day on which the corona lockdown was imposed.

The querent and her son wanted to cancel the appointment. But the friend and his parents took a look at the apartment anyway. They called the client and said they loved it! They thought the price was great for the area, the apartment was suitable for students, and the great opportunity might pass if not acted quickly, because the landlord expected more visits. So far the querent had only seen a few photos of the apartment and asked me the following question: “Should we agree take the apartment? Is its substance good and the rent appropriate? ". 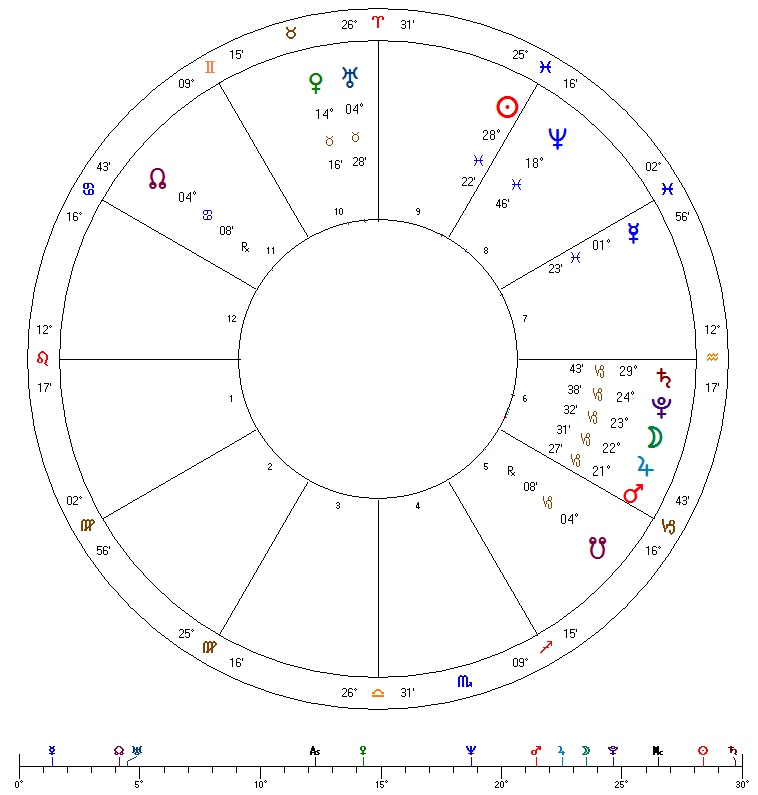 The 6th house in the horary horoscope is fully occupied. It includes Mars, the ruler of the 10th house, the slow Moon in its detriment, and Saturn, which rules the 6th and 7th houses. Despite its essentially good condition, this suggested that some work needed to be done in the apartment – either repairs or replacement of household appliances.

The landlord and the contract are symbolized by the essentially dignified but accidentally weakened Saturn. Saturn is in a cardinal sign and is about to enter Pisces and become peregrine.  to change the sign. * Saturn is the ruler of Mars, the signifier of the rental price. Mars is essentially dignified and accidentally weakened. This indicates that the landlord did not want to compromise on the rental price offered, which was slightly inflated. But Saturn's position also indicates that the landlord was about to experience changes that could have affected the price in unexpected or negative ways.

The moon is slow, essentially and accidentally weakened, which is the argument for slow development or possible delays. But the Sun, the querent's significator, is about to reach the sextile with the significator of the landlord, which is the argument of closing the deal. So at that moment I wasn't sure what the delays shown in the horary horoscope were related to. The Moon makes applicative sextile with the Sun, which confirms that an agreement was possible and the querent would agree to take the apartment, although the Moon must first conjunct the Pluto. The strong Venus symbolizes satisfaction with the decision. This much was what I shared with the querent.

Resolution of the question: The querent eventually gave her consent to the other family involved. It was agreed with the landlord to have the contract signed, but to postpone payments and moving into the apartment until the lockdown has ended. It turned out that there were a few minor things to fix in the apartment. It was also agreed that two families would pay the repair costs and, in return, skip the first month's rent. One and a half years after her son moved into the apartment, the querent is still satisfied with the choice.

* Thanks to the alert reader who pointed out the error to me.

Will my living situation change?

This client was living alone in an apartment that she co-owned and sometimes shared with her children and grandchildren, so that she did not feel independent. Her question was „Will my living situation change?“, which meant if she will be able to find and rent another apartment in some reasonable time. She was just starting to look for new possibilities. 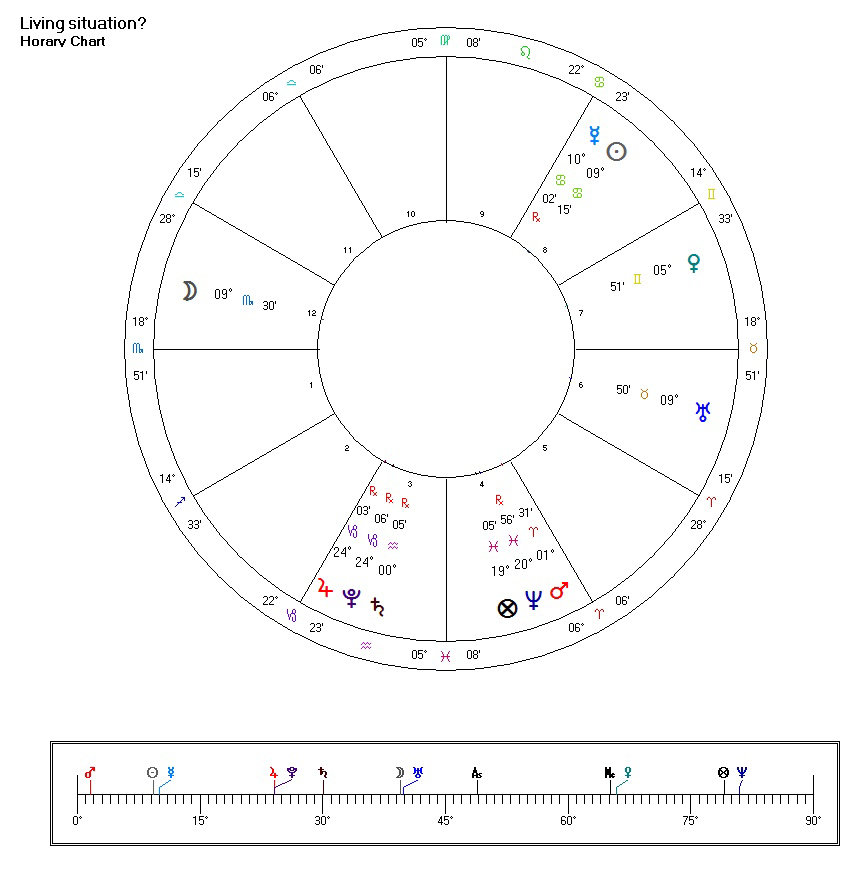 The client is represented by Mars in Aries in 5th house and Mars is also the ruler of the 5th house of children. The Moon is essentially debilitated in fall, in the 12th house, and in a very close applying opposition to Uranus. The Moon makes also a very close separating trine to the Sun, which is a positive testimony. Jupiter is in detriment and retrograde, sitting on the cusp of the 3rd house. Mars has just separated from Saturn, the ruler of the 3rd house. Sun is translating light between the two significators, Mars and Jupiter, and is the ruler of the 9th house.

The picture suggested by those astrological factors was such: the client feels very bad in her current situation, where she has to share the appartment with her children and her decision to look for another apartment was made suddenly, after long time of patience. Her children are probably noticing client’s dissatisfaction and will be ready to help. Client is eager and capable of finding another apartment. Someone will help her in the search by taking a role of mediator between her and her future appartment.  It is even possible that an apartment which she already knows, will be considered as a new place of residence. For the question, how long will it take, I used other astrological techniques to discover the possible time span.

Resolution: the client texted me five months later, to tell that she will move into new apartment soon. She felt as if the new appartment had litterally fallen into her lap, because she did not have to do anything about it, her brother in law found it for her, as is appropriately signifed by the Sun's rulership of the 9th house, the turned 3rd from the 7th. The new appartment was not known to her, but is in the area that she knows, in the neighbourhood of her brother in law.

The resignation of Clauda Schmid and Saturn