Last October the world was celebrating John Lennon‘s 70th birthday anniversary. Many articles reviewed his life. I was surprised that Yoko Ono is still blamed for the brake-up of Beatles, for her supposed negative influence on John Lennon and his marriage with Cynthia. Unlike Cynthia or May Pang, Yoko has not yet told her part of the story about Beatles, truth about the affair and marriage with John.

I was curious to see what astrology has to say about John Lennon´s relationships. 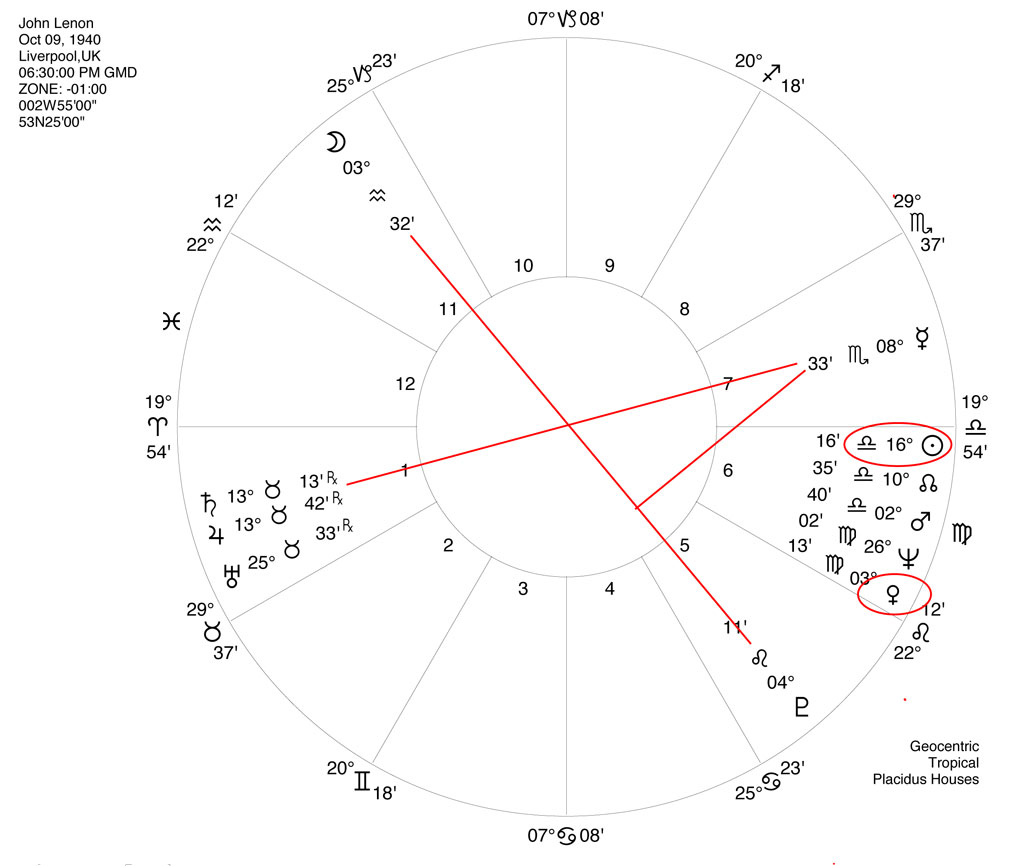 With Moon in Aquarius and Sun in Libra John Lennon’s chart shows strong social orientation and humanitarian orientation. Libra Sun makes no ptolemaic aspects and opposes Ascendent and suggests that John Lennon was "dancing to the beat of a different drummer". Sun rules the 6th house and corroborates strong social awarness. Venus in Virgo is peregrine too and rules 7th and 2nd house. Sun and Venus form a semi-square and this adds strong focus on relationships to the picture. John Lennon needs other people for his self reflection. His intimate relationships must be based on much more than sensual. They must encompass his humanitarian world view and philosophical attitudes.

Mercury in 7th in Scorpio is forming T-square with Moon-Pluto opposition. Exchange on a deep level will be important in partnerships. This constellation suggests also that his problematic relationships with mother would be carried over in partnerships, but could also be worked out there. Mercury opposes Saturn, the ruler of MC and Jupiter, the ruler of 9th, and corroborates the connection of individual ideology , relationships and personal fulfillment.

Mercury - Jupiter contact suggests also that higher education would be very important for fulfilling intellectual needs. Even though Lennon earned fame with Beatles, it is obvious that only one portion of his needs was fulfilled with the band.

Let‘s look at the chart of Cynthia Lennon. Birth time is unknown, so I will exclude houses from consideration. 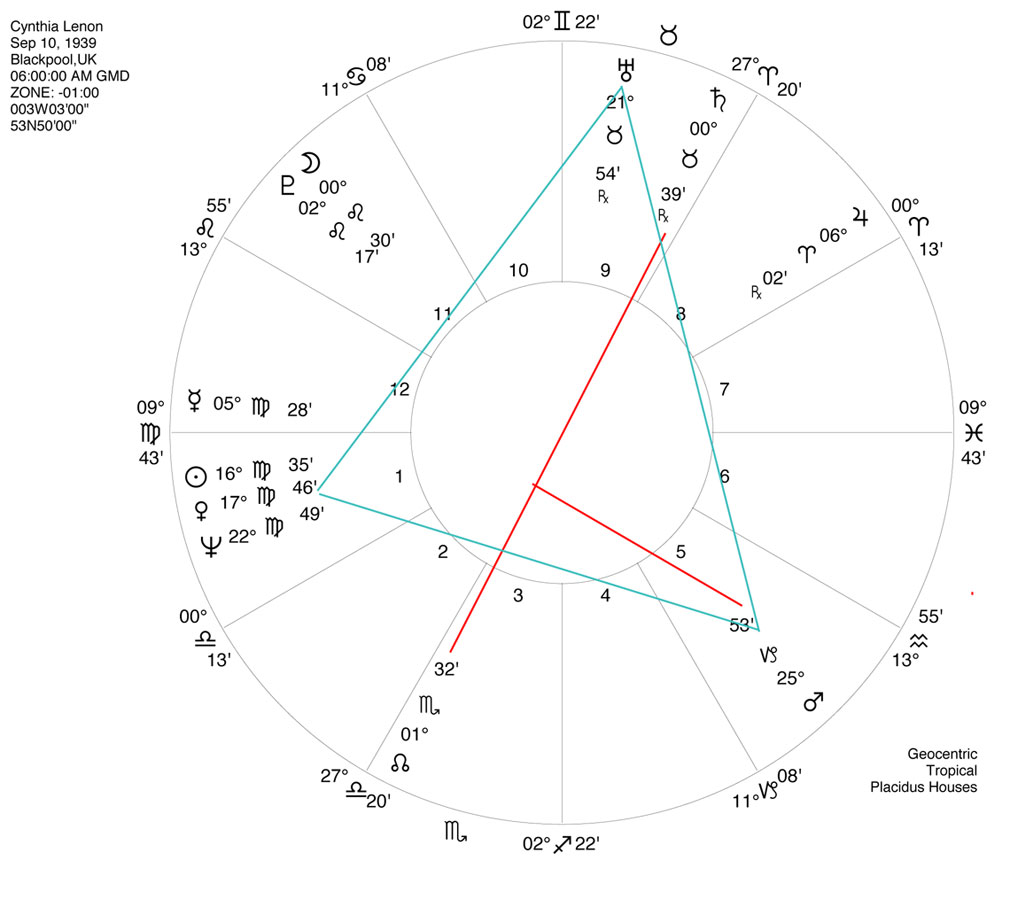 Depending on the time she was born, her Moon was in Cancer or Leo. Either way, with the Sun in Virgo, her basic needs seem quiet different from John Lennon′s.

Striving for security within family and a kind of conservative code would dominate with Cancer moon.

Leo Moon would suggest self - centeredness with strong need for attention and for the confirmation of her intellectual capabilities.

Moon will travel from last degrees of Cancer to early Leo on her birth day and there is a chance to square Saturn in Taurus and oppose Mars in Capricorn. This combination would suggest more strategical approach to relationships that should fulfill her need for security in the family in the first place.

If Moon would be in Leo, it will conjoin Pluto and trine Jupiter. This contact will add a philosophical approach to life and patterns of behavior that protect pride and dignity by being in control or by controlling others somehow.

Venus and Mercury within Virgo stellium emphasize cerebral and idealistic approach to relationships. Sun in Virgo suggests high expectation on herself and others. Mental energies for discrimination and refinement dominate the world view.

There is an Earth Grand trine between Mars, Neptune and Uranus, suggesting practical independence. We do not have birth time and cannot consider houses and rulership network to see further possible patterns within relationships, but even so, her chart suggests self-containment and self-sufficiency. She has different expectations in the relationship than John Lennon. John Lennon needs relationshps for defining and establishing the Self.

We are looking now the chart of Yoko Ono. 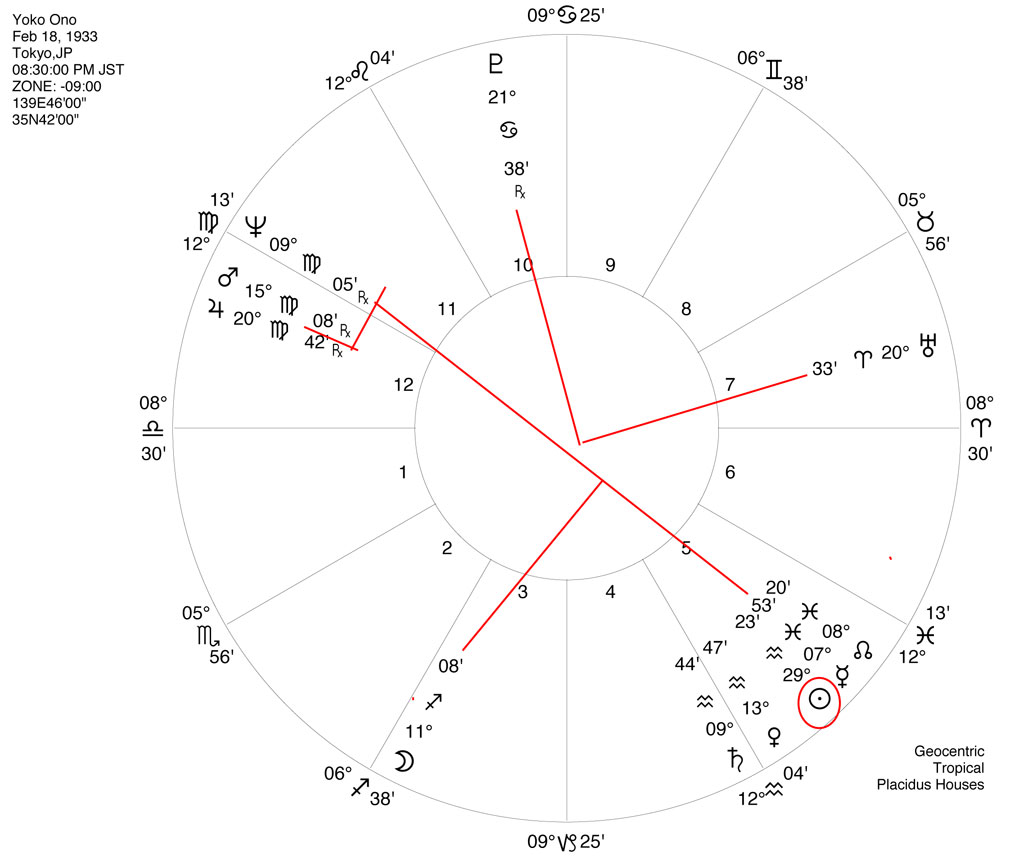 Sun in Aquarius and Moon in Sagitarius blend shows an intellectual person and the need to express and have her independent and innovative opinions respected.

Independence, idealism, humanitarian awareness and internationalism are emphasized. Peregrine Aquarius Sun is attached to Mars, the ruler of 7th, through quindecile (165° aspect). Yoko Ono is "dancing to the beat of the different drummer" and is strongly focused on finding an anchor in intimate relationships. For her it is very important to be able to express and live her intellectual and humanitarian interests in relationship.

Mars, ruler of 7th, in 12th house makes a conjunction with Neptune, it squares the Moon, the ruler of MC, and opposes Mercury. We see here strong idealism that she projects onto relationships, but there is also a challenge of confusion and some kind of sacrifice . Uranus, ruler of the Sun, is related to 10th house Pluto and suggests her need to establish identity through career and to preserve her Ego- Strength in relationships. With Venus as the ruler of the ASC in conjunction with Saturn, there is certain tightness in emotional expression.

Without even looking at composite chart, we can see that John Lennon and Yoko Ono were compatible as partners. Astrology suggests, that Yoko Ono was playing an important role in the life of John Lennon, especially regarding his personal fulfillment.

Regarding how Yoko Ono is perceived in the media, there is an interesting point made by her 7th house and her Venus. We can look at Venus as “PR department” of a person. In her chart, Venus conjunction with Saturn rules her Ascendant. The ruler of 7th house, the public, is retrograde and in 12th house. Both constellations suggest difficulty with her public projection. Yoko Ono was surely too “quirky”, too intellectual and unglamorous for a Rock-n-Roll wife.