The latest news about the engagement and forthcoming wedding of glam-pop singer Lady Gaga prompted me to look at astrologfical weather for her chart. Simultaniously with the astrological measurements that suggest a love relationship, there is the approaching first Saturn return, which means that Saturn is taking the same position in the skies as it had at the time when she was born. Astrologically that is a very significant dimension in the personal development.

Saturn's symbolic in astrology and its meaning in the natal chart is multilayered. In the first instance it represents the time and the facts-based level of life - it is related both to earth and bones. Learning, gaining experience, maturity and aging are also in the domain of Saturn. Necessary boundaries, restrictions and controls are the essential part of this experience. Saturn can stand for fears, power of resistance and defenses, but also for determination to move forward and to consolidate our own position in the worldly sense.

Transits of Saturn and Saturn return

When transiting Saturn is moving around the natal chart, it marks important developments and stations in life. Saturn square or opposition to its natal position will always mark such periods. But the most profound of all is the Saturn Return. Saturn needs 28 to 30 years to move through the Zodiac, return to it's initial position and close the first Saturn cycle that is mainly related to the growing and learning. Although in our society young people gain legal age of majority when 18 to 21 years old, the real transition into the adulthood is reached around age of 28 to 30, exactly during the time of the first Saturn Return.

Events that precede or that happen around the time of exact Saturn return, are paving the road for the next Saturn cycle, that roughly corresponds with what is called "middle adulthood" in psychology. In lives of many people it is the creation of own family or making significant career decisions that mark this transition.

Let's look at Lady-Gaga's horoscope in regard to the first Saturn Return. She engaged in February 2015 and is reportedly making wedding plans. We can see in the chart below, that Saturn is approaching the conjunction with its natal position and will reach it  in December 2015. This suggests strongly that the forthcoming marriage is laying a foundation for years to come. Because her natal Saturn is positioned in Sagittarius and in the 6th house, the maturity will unfold mainly through adjustments within work, habits and health area. These adjustment will be initiated by marriage and her wish to start the family, and will likely thematize her excessively strong work moral that can lead to health deterioration, what is suggested by this Saturn position. Lady Gaga reportedly had a health issue in early 2013 after she performed despite of the hip injury and was forced to cancel her tour. 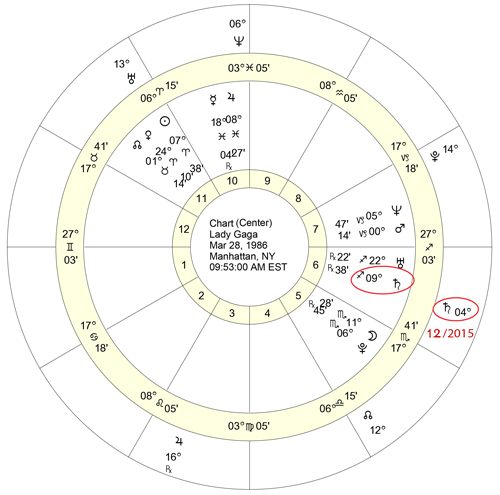 An interesting example gives the horoscope of Angelina Jolie. The first Saturn Return for her took place exactly in July 2004, with one hit only. This is the time where she met Brad Pitt on the film set. We see now, after more than 10 year, that this love affaire set the foundation for her large family with many children. And that's not all. The natal Saturn of Jolie's chart is in the 12th and in the sign of Cancer. This position strongly suggest that her maturity will unfold through dealing with her own family, as well as through dealing with fears and experiences from her early childhood, particularly with issues of belongingness, emotional security and comfort - all the area of Cancer and 12th house.

One example from my astrological practice follows -  a young man's horoscope that suggested great intellectual capacity and leadership potential. Right after the high school he started to work in a low profile job. Because he was appreciated and promoted at work, being driven by inner potentials, he started to think of professional education. Not surprisingly for an astrologer, he started vocational training while maintaining a part time job exactly in the time of his first Saturn return. That important step was laying a foundation for his personal development through expanding career possibilities. Natal Saturn in his chart is found in the second house in Scorpio. This suggests strong ambition driven by the need to prove him valuable and in the same time suggests some self-worth issues related to early home dynamics. The maturing process introduced by the first Saturn return will unfold here though dealing with self-worth issues and adjusting his ambitions to his potential and psychological needs.

Another example with first Saturn return that is related to making career descisions gives the horoscope and the life of John Lennon. In March 1970 Saturn crossed its natal position with one hit. That is the year when Beatles officially split and when Lennon debuted with first solo album John Lennon/Plastic Ono band. In 1969, the year that preceded the first Saturn return, John Lennon married Yoko Ono and already stepped out of the band. Located in the 1st house in the sign of Taurus, this Saturn Return suggests that maturity for John Lennon went along lines of personal emancipation and defining personal values, both in emotional and artistic sense. Anyone who has listened to this Lennon's album will immediately recognize that those issues are already reflected in biographical and emotional lyrics as well as in the music.

This saturnian road into maturity may not always be so clear, but it will always follow developmental concerns of the sign and the house Saturn is positioned in.

If you are in your forties or above, look back at the time when you were between 27 to 30 years old. What was going on then? What area of life was in the focus? How did that time influence the course of your development and life? I am sure that you will discover an interesting relationship.

Read about the Saturn Return in real life here:
Johnny Depp and the astrology behind the defamation trial