Rapid career of Karl Theodor zu Guttenberg is very intriguing astrologically. He is born on 5th December 1971 in Munich, Germany. Up to the moment of this writing, July 2011, no official birth time is known to the best of my knowledge. My proposed rectified birth time is 9:45 am. This gives a chart with Ascendant on 7 Capricorn and Midheaven on 8 Scorpio, which I feel has a potential, as it corresponds with zu Guttenberg‘s  personality and reflects professional developments and significant life events.

Latest news about his relocation to USA confirm this chart through current transit of Pluto over Ascendent, that so often corresponds with geographical relocation.

Before we dwell on the rectified chart, let´s look how was zu Guttenberg perceived publicly. 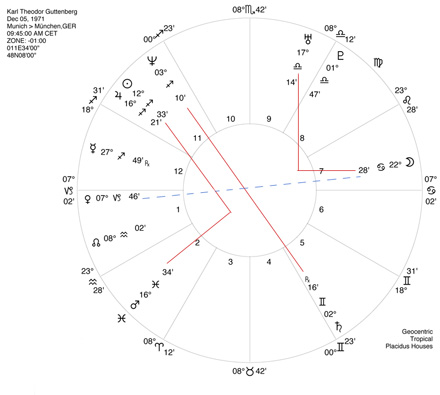 Sagittarius Sun and Jupiter are squared by Mars and suggest strong ego , need for admiration, impulsivity and self – dramatization. Cancer Moon in 7th suggests that he needs public projection, feels "at home" in public and has good feeling for the expectations of his audience. Public perception of "shining man" has to do with Sagittarius energy that represents itself through the Cancer Moon in 7th as a "good boy".

Capricorn Ascendant tones down the expression of exalted ego with seriousness and with cultivated, conservative mannerism. The impression he makes on others is also very charming, polite and courteous - with Venus so tightly on the Ascendant. Certain stiffness of expression, certain inhibition, is related to this Capricorn Venus too. With Capricorn influence over the Ascendent, it is not surprising that zu Guttenberg promotes himself with values such as responsibility, duty and commitment. (see his website)

Cancer Moon in 7th is quindecile Venus in 1st house and North Node ( Moon = Venus / North Node) and suggests strong drive to find emotional security through acceptance and approval - through others and through the public. This aspect is in connection with thw undercurrent drive to use emotions strategically, to establish emotional security by creating emotional bonds with public (and with others). The configuration reflects also the apologetic attitude and "humility", that zu Guttenberg displayed several times during his political career. According to C. O. Carter, 7 Capricorn (degree of the Ascendant in this rectified chart) and strong Moon, suggest oratorical ability  and the power to sway masses. During zu Guttenbergs biggest crises, in February 2011, we could read newspaper titles such as "People stand by zu Guttenberg", what illustrates this abilities.

Pluto, the ruler of Midheaven, squares Sagittarius Mercury and suggest that he will employ his incisive mind, rhetoric and diplomatic talent professionally. Pluto is on the Sun/ Moon midpoint and trines Saturn, what suggest political interests and potential for prominency. Mercury-Pluto square can suggest hasty thinking, irritability and overestimation of self that could manifest in relation to career and social status. 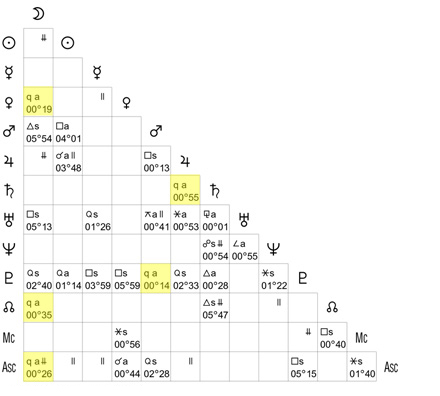 Ascendant ruler, Saturn, is in 5th house opposing Neptune. This connotes charisma, "special hold over people" (1), tendency to perform, certain exhibitionism and pretense. In combination with Sagittarius Sun and Jupiter (self-indulgence and exorbitance) and with Capricorn Venus on the Ascendent related to Moon, the self-dramatization can become vain showmanship. Saturn - Neptune connection is also related to deception. There is not a tendency for backstair methods, but deceptive tools can be used if they bring desired results.

Rectified chart shows also Moon square Uranus and individualism, inner unrest and irritability. The media has described zu Guttenberg‘s political style as self-willed and authentic, what corresponds to this constellation too.

In the following text I look at transit and solar arc activity related to important life events that demonstrate correlations with the rectified chart for 9:45 am.

All three Arcs suggest change in his personal environment and involve mother.

Transiting Uranus activates MC-IC axis from November 1976 to September 1977. Simultaneously, it squares North Node. This stellar picture suggests that changes my result in disruption of his early home and emphasizes relationship with mother once more. We know from the media, that zu Guttenberg stayed with his father after the divorce.

In 1992 zu Guttenberg begins his studies of jurisprudence. In 1993 he takes additional studies in political sciences.

Solar Arc Jupiter, natural ruler of education, arcs to Venus, the ruler of 9th in his chart, exactly in December 1992. Solar Arc Uranus, positioned natally in the 9th, is arcing to Midheaven, exactly in January 1993.

Transiting Jupiter squares its natal positon and Mars in summer 1992. In September and October Jupiter makes aspects to the natal Mercury-Pluto square and suggests the expanding of personal resources and personal perspective through education.

Venus is activated once more through transiting Jupiter. Jupiter has to do with augmentation and expansion, and its connection to the ruler of 9th house is related to the additional studies of political sciences

In 1999 zu Guttenberg completes his law studies. In the same year he joins CSU party, what can be considered as laying foundations for his subsequent political career. He was 26+ years old.

In that year transiting Pluto crosses several times the midpoint Ascendant  / Midheaven , what usually brings change of perspective in all directions of life. Pluto rules MH and pertains to career and status.

Transiting Saturn crosses IC in May 1999 and signifies new beginnings. Jupter is crossing Pluto, Sun/Moon midpoint, Venus and Moon. This constellations are related to his studies, to beneficial public relations (joining political party) and to his private partnership. Moon rules the 7th house, Venus is related to 7th house through opposition and Sun/Moon midpoint relate not only to man-woman relationship but also to public relations.

KT zu Guttenberg married on 12. February 2000. Solar Arc Neptune squares Pluto, the ruler of Midheaven: romantic, idealistic view on his identity and status or perhaps confusion that can be related to changes.

Solar Arc Midheaven makes aspect to the Cancer Moon in March 2000 and highlights relationships with a female and the need to create security within family, to belong emotionally. Transiting Pluto conjuncts natal Sun on 9th February  for the first time and brings essential and profound change of perspective with it.

On 11th of Feb transiting Moon crosses IC and on the wedding day, 12th of February, transiting  Venus opposes his Moon in the 7th.

Vicesekretary of CSU and Secretary General of the CSU

"In order to attain his goals, zu Guttenberg goes self-willed ways. He made sure to make a sensation in December 2007: He announced - surprisingly for many – the candidacy for CSU Regional Chairman of Upper Franconia. With a flaming speech he convinced his party supporters back then and won against Hartmut Koschyk, member of the Bundestag from Bayreuth" (BR-ONline, Bayerische Rundfunk, 23. 2. 2011)

This important career step is marked through Solar Arc Pluto to Midheaven, that was exact in March 2008. Solar Arcs focus important periods of time in the development, mostly up to 6 months before and after the exact aspect. Pluto rules 10th house, so we can see here very important change of perspectives within career.

Transiting Uranus makes a square to Jupiter throughout 2007 and brings " a big brake" (1) and "lucky turns in life, sudden recognition" (2)

Transiting Uranus also makes conjunction to Mars, the ruler of 3rd house, and transiting Pluto conjuncts Mercury for the last time in November 2007. This constellations suggest great energy focused on demanding and creating new personal perspectives. Opportunities to employ oratorical talent vocationally are also created with this transit. Transiting Jupiter returns to natal Sun in September and to natal Jupiter in October 2007 and stands for success. 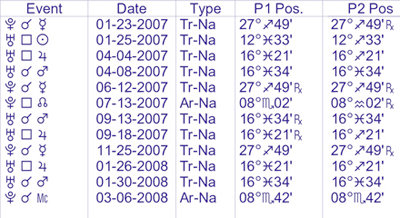 The next station in this rampant career was Secretary General of CSU. Political analyst say, that this position has been a springboard into high politics for many predecessors of zu Guttenberg.

Top management of CSU decided in the night from 29th to 30th October 2008 that zu Guttenberg will be successor of the previous Secretary General who stepped down end of September 2008. (Welt-Online, 30.10.2008). He was appointed to the new office on 3rd November 2008.

After German Minster of Economy surprisingly resigned on 7th February, zu Guttenberg was chosen by his peers in the governing party to follow into this office on 9th February 2009.

Important background transit is Pluto square to its natal position and to Sun/Moon midpoint exactly on 8th of February. This constellation marks the beginning of deep transformation of personal perspectives and ascent to public personality. His concept of self-realization changes deeply too. The developments will be accomplished by the end of 2009 and bring forward his social status and career through Pluto´s rulership of the 10th house. After Pluto transit to its natal position nothing will be the same as before. Last hit of Pluto to natal position and Sun/Moon midpoint happened in November-December 2009. Zu Guttenberg was appointed as Minster of defense on 28th October, as part of this Pluto transit.

Solar Arc Node activates Jupiter-Mars square in 2009 : “beneficial connections and gaining advantages with other people,attainment of joint success” (2). The natal chart shows also North Node square Midheaven, what shows the important role of different connections and of the pubic in general for his career.

In February 2011 Sun is arcing to the 7th house Moon and highlights his public relations.

Uranus finishes transit to radix Mercury in 12th at the end of January. After the fact, we can say that Uranus has revealed one of the possible influences of Mercury in 12th , which is behind-the-scene machinations . Rectified natal chart shows Mercury ruling the 8th from 12th house and related to the ruler of the 10th house. This constellation, besides Neptune- Saturn contact, suggests that he can be tempted to attain benefits for his career with unfair practices.

But the most important aspect is the first transit of Pluto to the Ascendant-Descendant-Axis in February 2011. This is the begin of dramatic transformation of identity and personal perspectives. The relationship to public is also included in this process.

Natal chart shows that Pluto, ruler of 10th house, makes square to the Ascendent. This suggests that zu Guttenberg will work hard on his personal resources and competencies to define himself through career and status. He received permanently his doctorate title in the beginning of 2009 with the first Pluto square to its natal position. As Pluto makes the transit over Ascendant, those previous Pluto developments are unveiled for the public view.

First reproach of plagiarism is published on 16th of February in "Süddeutsche-Zeitung" .

Two transits are focusing the time around 25th february: transiting Pluto in conjunction to Ascendant and transiting Jupiter squaring Ascendant. Jupiter is often described as "lucky" but this is only one of the possible manifestations. Jupiter enlarges and expands everything it "touches". Here it "plays" together with Pluto a role in the transformation of the public persona zu Guttenberg and "helps" the intensification of the affaire.

His doctorate title was denied on 23rd February. On the 1st of March, zu Guttenberg held a short speech for the media and passed in his resignation.

He stylized himself as a victim of the media in this resignation speech, using the same populistic mechanism that he complained about. It is not surprising that he closed the speech with pathetic words:" I have always been ready to struggle, but I have reached the boundaries of my strength"- We think of Venus - Moon connection in the natal chart and of his strong need to reach his pubic emotionally.

Transiting Jupiter squares Venus exactly on 1st of March and activates Quindecile with the Moon in the 7th, what correlates to the exaggerated speech.

We can see from transiting Uranus that the transformation announced by Pluto could be drastic. Uranus makes opposition to Pluto (ruler of the 10th house) for the first time in April 2001. This transit correlates to "revolutionary ventures and overthrow" but also to the " construction of the new" . Uranus also makes opposition to Sun/Moon midpoint and suggests " sudden developments" (1), renewal and wake-up call.

In June there were reports about zu Guttenbergs relocation to USA. This matches Pluto transit over the Ascendant and also Uranus transit to Pluto. The picture of change and new beginning is complemented with transiting Jupiter crossing MC-IC axis and with the probably actual relocation taking place.

This is the overall picture for 2011: 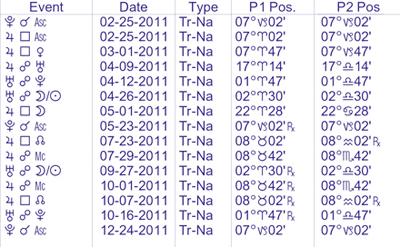