The resignation of Clauda Schmid and Saturn

Another Saturn transit preceded this one - in 2012 Saturn crossed three times her natal Neptune. Saturn to Neptune transit suggests times when emotional defense mechanism is challenged and when there is almost non possibility to emotionally shield  oneself against pressing reality. Disappointments are often during this time.
During that time additionally transiting Neptune made an opposition to her natal Pluto. Neptune to Pluto transit suggests confused or somehow veiled personal perspectives. Claudia Schmid was confronting particularly strong  resistance against her reform program since her entry on office in 2007. According to the astrological picture, year 2012 was a specially difficult year for Schmid.
The news about her resignation comes against this background and happens simultaneously with Saturn to Sun transit. Until the end of  2014  Saturn will cross three times her natal Sun. During this transit professional goals are assessed and often, as a consequence of circumstances, a reorientation is required. Schmid also announced her imminent retirement form politics and mentioned career opportunities in business, what reflects the upcoming Saturn to Sun transit.
Image: The first from three exact Saturn transits takes place on December 15th.  Claudia Schmid, born on Mai 10th 1959, Sunrise Horoscope. 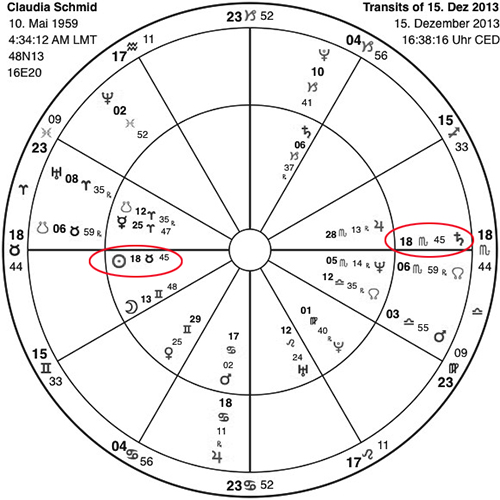