I go on with the astrological analysis of professional politicians in this post. And again in this context, Max Weber's view of politicians goes through my head:  "innately »destined« leaders of the people" that "seek power". Let's see what the horoscope can say about this. 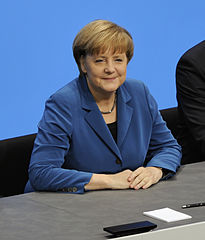 The birth time for Angela Merkel is categorized as inaccurate, so I will not consider astrological houses. But what can be said with certainty about this horoscope is that the combination of the Sun in Cancer and the Moon in Aquarius suggest an adaptable and friendly-minded person, who keeps her emotions under control and takes a detached stance, which can come across as arrogance. Nevertheless, this combination brings good instinct for people, particularly for group dynamics. The need of the Aquarius Moon, to be in one way or another important to others, can also take on a social dimension and be well realized through political ambition. The Moon is without any aspects in this chart, which indicates difficulties regarding her feeling of "belonging", especially at a young age. Such difficulties can also be overcome by anchoring oneself in a political party and thus establishing  the feeling of belonging and connectedness.

The Cancer Stellium with the Sun - Uranus conjunction, includes also Mercury and Jupiter. The thought processes are basically navigated by what is felt and by the intuition. The Jupiter-Mercury conjunction in Cancer can point to the richness of thought and the propensity for broad concepts, as well as to the beliefs rooted in emotions and memory. 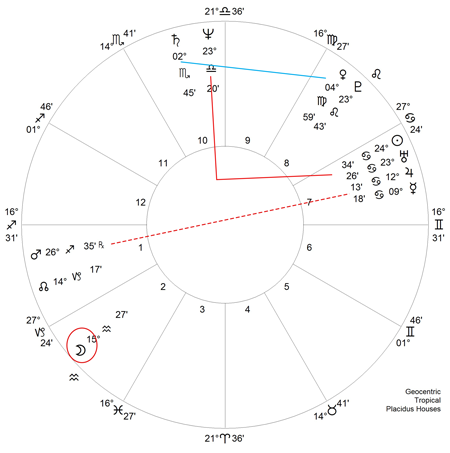 Since Mercury in Cancer is not exactly the most talkative position of Mercury, there is a tendency to keep thoughts for oneself and to communicate cautiously. The retrograde Mars in Sagittarius forms a Quindecile (165 °) with Mercury and Jupiter. This is, on the one hand, the image of a cautious course of action, and on the other, of actions that are strongly rooted in opinions and beliefs.

The Sun forms a conjunction with Uranus, both square the Neptune. There is a strong will and a strong ego, as well as a steady pursuit of one’s goals, although at first sight, the Neptune can disguise this dynamic. The Scorpio-Saturn forms only a flowing aspect with the Venus and is in the midpoint of Jupiter and Pluto. This constellation points to distinct organizational abilities and claim to power, and both can find their expression in the profession, especially when Saturn is in the 10th house. 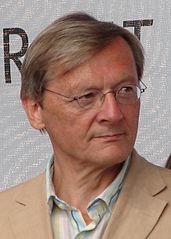 The Sun in Gemini and the Moon in Taurus in the horoscope of Wolfgang Schüssel, indicate a fundamentally friendly attitude, as well as eloquence and skill in social interaction, which can easily win people over. Cleverness and sophisticated approach of this combination have pragmatic features, and do not merely serve gaining the sympathy of others. Stability, perseverance and focus on the practical, which corresponds to the Moon's position in Taurus, are  supported by the solid analytical thinking, combinatorics and versatility of Mercury in Gemini. The strong will, which is otherwise not necessarily a characteristic of Gemini Sun, is indicated by the Uranus-Sun conjunction and corroborates the Taurus-Moon in this regard.

Good sense for people, curiosity and friendliness, combined with pragmatism and perseverance, can produce a good leader, even if these personality traits are not typical of managerial position. In addition, the Aquarian Ascendant will not necessarily appear impertinent when holding any superior position.

That beliefs also play an important role for Schüssel, is indicated by the square from Jupiter to the Sun and by the trine from Jupiter to the Moon. Even though this constellation with the Jupiter in Virgo supports the positive or optimistic attitude, it nevertheless has side effect: in moments of strong confidence he can overestimate or misjudge situations and people.

When we take in Uranus with its square to Jupiter and conjunction with the Sun, we see a strong ego emerging. And since Mercury sits relatively close to the Sun, his judgment will ultimately be in the service of the ego that wants to be recognized, despite his capability for logic and facts. 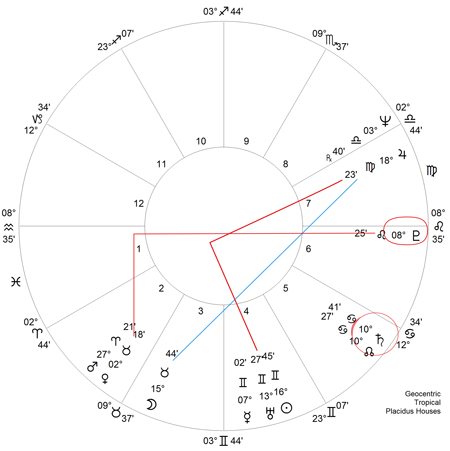 In addition, there is the not aspected Saturn that rules the 12th House and traditionally the Ascendant. Saturn is placed in the midpoint of Uranus and Pluto, Uranus is in the 4th house is the (modern) ruler of his Ascendant. This is a picture of one-sidedness and stubbornness that surpasses the stamina of the Taurus Moon and does not refer to Schüssel’s beliefs symbolized by Jupiter - they have their origin in a very intimate motivation, which is kept private.

In the press,  Schüssel was referred to as a Silent Chancellor, which seems unusual, since both Gemini and Mercury are emphasized in his horoscope and also the Sun-Moon combination suggests eloquence. But, if we look at the Jupiter in Virgo and its connection to the Sun-Uranus conjunction, as well as Jupiter’s rulership of the M.C.s  and its position in the 7th house, we can associate the self-righteousness of this astrological image with the public silence.

Schuessel's silence applies, among other things, to irregularities and corruption that took place at the time of his chancellorship, which are connected to his former coalition partners, who actually brought him to power. Although he could speak very well, Schüssel chooses silence as an argument for his infallibility or for his good conscience.

And that is also something that distinguishes Angela Merkel from him from. Merkel, with her Cancerian ways, is able to concede her political missteps and thereby regain popularity.