The news about Britney Spears' conservatorship is definitely shocking. Her own words in the court in June 2021, the article in the New Yorker and the two documentaries by The New York Times “Framing Britney Spears” and “Controlling Britney Spears” paint a grim picture. A hard working child in the entertainment industry developed into a superstar and has become an unlikely victim of the legal system on one side and her own family on the other. 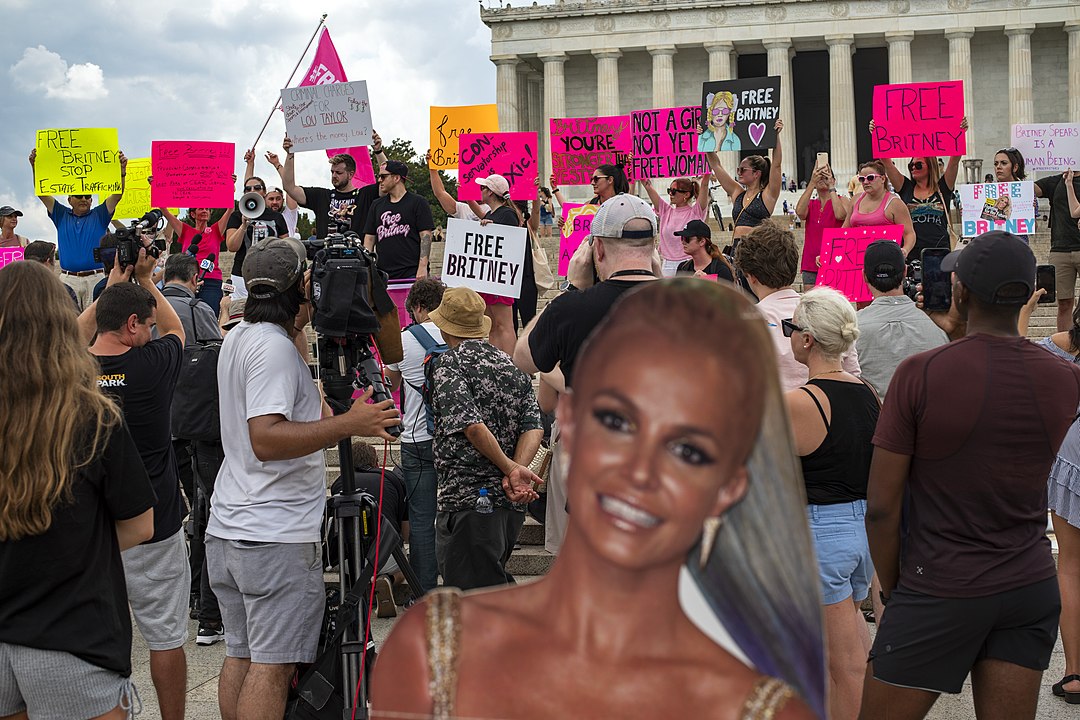 CC BY 2.0, Mike Maguire, The #FreeBritney movement in front of the Lincoln Memorial, 2021

What impressed me the most, however, was the strong personality of Britney Spears. She endured restrictions and surveillance reminiscent of the KGB's tactics towards its own citizens during the Cold War. She has been massively ignored and manipulated. She lived in fear and felt alone as she would be constantly cut off from people who sympathized with her. The ultimate means of pressure of her conservators was to keep her from seeing her children unless she gave in and did what was imposed upon her. Her sons were taken from her custody shortly before the conservatorship drama began in 2008, and she was granted only visitation times.

She had no choice but to comply, but she did not give up. For years she quietly pushed for the termination of conservatorship. Despite the pressure and fear, Britney Spears was successful professionally. Needless to say, live performances are a special kind of work that require maximum mental and physical strength and focus.  So it is very difficult to understand that she was subjected to such kind of conservatorship. Only the attentive Spears fans, who for a long time gave the impression of conspiracy theorists, noticed that something was wrong. It amazes me how she endured all this for thirteen years and did not break down.

Influences of Libra and Saturn 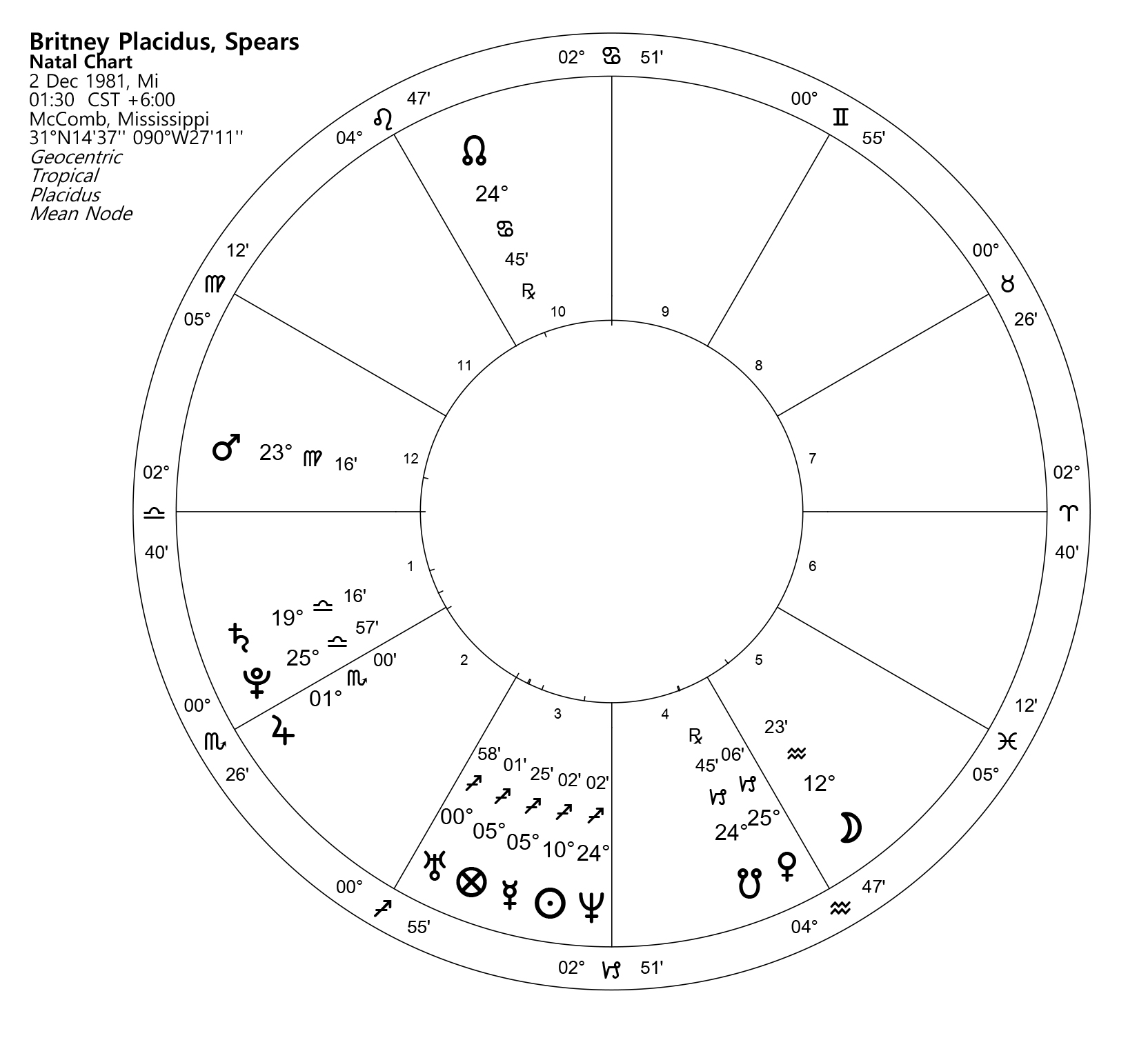 The strength to endure and not lose composure, which is both a blessing and a curse, is reflected in her horoscope. It is both her natural disposition and a pattern of behavior established in the early years of her development.

The Libra Ascendant suggests that being kind,  nice and pleasing others has been directly or indirectly a rewarding behavior. Her natural sense for the needs and desires of those around her, of what she must do to be liked, is colored by the influence of emphasized Saturn in the first house. Venus, the ruler of the Ascendant, it is in the sign of her triplicity and ruled by the serious, disciplined and industrious Saturn in Libra.

Saturn rules the 4th house, and so is strongly associated with the dynamics of early childhood, especially the father figure. Venus is a significator of love, social life and art. When colored by Saturn, it adds a sense of duty or discipline to the understanding of love. This Venus is in the sign of Saturn, it is connected to it by a square, and the two are in mutual reception. Saturn is conjunct Pluto and both square Venus. This astrological image emphasizes parental rules and controls in childhood that in one way or another inhibited or limited Britney's self-assertion and emotional expression.  Venus is also conjunct the South Node, and this weakens a planet's ability to express itself. We can understand this whole configuration as a susceptibility to being imposed or overwhelmed by people or things represented by Saturn.

The other side of the coin is that the emphasized parental control and the natural disposition of Saturn in its exaltation lead to patterns of behavior that easily accept discipline and hard work.This astrological configuration is part of her success as a child-performer in the entertainment industry. Britney was massively rewarded for doing what was expected from her - and I don't mean only money! The Sagittarius Sun with Aquarius Moon and Libra ascendant means that the need for positive social interaction and confirmation must be satisfied in order for the person to feel fulfilled. Britney works in a profession that enables her to meet those needs. Plus, she is very successful and loved by millions of fans.

But the square of Saturn to Venus in Capricorn alerts us to the lack of emotional expression, a possible lack of empathy, and the possibility of harsh treatment by both or one of the parents. This also suggests that her early home was the source of hurt and vulnerability. Pluto only complicates things: it emphasizes parental control and drives her into hard work and discipline. Let's not forget: With whatever astrological configuration and in whatever family we are born, what we perceive and learn in our developmental years is normal for us, because that is the only kind of bonding and relating that we know! At least until later in life, as is usually the case. As a result, Britney may not have perceived her parents as harsh or domineering or as depriving her of anything. She obviously took the needs and desires of others seriously and made an effort to fulfill them. Another component of the Pluto-Saturn combination is that, circumstances permitting and with the support of other astrological signatures, it provides the tremendously focused drive and discipline required for record-breaking performance.

Saturn, the ruler of the 5th house of children

But let us return to Saturn in Libra and its position in the Ascendant. In terms of personality traits, this suggests that self-protection consists of being polite and friendly to others, while inwardly distancing oneself and possibly not asserting oneself for strategic reasons to protect oneself. It is very likely that Britney learned early on to hide her true feelings by putting up the facade of cheerfulness and politeness. We can also say that part of her self-protection is to please others, which is indicated by the influence of Libra and Venus. Saturn in its essential dignity, gives her a graceful endurance.

Saturn is also the ruler of the 5th house of children. Although he is essentially dignified, he is in the same time hurt by Pluto. This reflects the blessings of having children and the separation from them that she suffers. This may also indicate that children can be used as a means for controlling Britney. In addition, Mars, the signifier of anger, is hidden in the 12th house. Anger has a defensive and self-preserving function when used constructively. Although Mars is in its triplicity and term, the house position and the square to Neptune prevent this Mars from expressing directly.

These astrological configurations are amazingly reflected in the way Britney has tried to cope with the nightmare of imposed conservatorship and keep her children in her life. According to the documentary "Controlling Britney Spears", she was constantly threatened that she would be deprived of the right to visit her children, and she lived in fear. The conservatorship put her in a position where anything she did, positive or negative, could be used as evidence to justify the measures imposed on her, according to the journalists who investigated the matter. This leads me to believe that she felt compelled to meet the imposed conditions and that the personality traits and strength I addressed above helped her prevent the greater tragedy. What is misinterpreted by conservators as an argument that Britney gave her consent to everything they imposed on her.

The entanglement of money, astrologically

Since money seems to be involved in this infamous case, I wanted to take a look at the financial side of her chart. Although Britney Spears was legally found to be unable to look after herself, she stepped in front of the audience from the day one of the guardianship and was earning a fortune without a stop. With that money she was paying people who held power over her, including her father, his lawyers and many others.

Mars is the ruler of her 2nd house, he has the essential dignity, forms a trine to Venus, the ruler of the 1st house, and a sextile to the North Node in the 10th house. He also rules Jupiter in the 2nd house. This is an astrological argument of increasing financial wealth through one's own hard work. Pluto on the cusp of the 2nd house contributes to the increase of money with its power of focus, while warning against possible negative experiences related to finances. Interestingly, the ruler of the 2nd house is located in the 12th house, which opens up the possibility that the native will benefit financially from people who are "secretly anxious to do him harm," as Henry Coley, an English Renaissance astrologer, put it. The way Britney has made her fortune over the past 13 years seems to reflect this. Mars in close square to Neptune points to nebulous ways this money could dissipate.  Since Mars also rules the seventh house of partnerships, one of the channels through which the money crumbles could have to do with private or professional partnerships. This is obviously reflected in the alimony payments to her ex-husband, who managed to deprive her of custody of the children after the divorce.

With the ruler of the 7th house in square to Neptune, her ex-husband might actually be someone who is unable to take care of himself, or we might question his motives. From an astro-psychological perspective, the same constellation suggests that Britney tends to be self-sacrificing in her relationships and may idealize and misjudge her partner. But with the trine between Mars and Venus and their rulership of the 1st, 2nd, 7th and 8th houses, there is also the possibility that she will find a partner who will support her and even expand her financial potential.

The restriction of personal freedoms

The revelations about conservatorship show that it was not doing what would be the best for Britney, but was a massive restriction of her personal freedoms. Traditionally, the 4th house, like the 12th house, is associated with imprisonment, that is, with restrictions. We see here that Venus, the ruler of the Ascendant, is in the 4th house. The ruler of the 4th house is Saturn, the natural significator of restrictions, and he is in the 1st house. He forms a square to Venus and both planets are in mutual reception. Unfortunately, this suggests a possibility in her natal chart that seems to manifest in the conservatorship she has had to endure.

The astrological role of Mercury and the 9th house

Since it was made possible by the legal system and legal representatives, it is interesting to note that the ruler of the 9th house and the 12th house is the same planet - Mercury burned by the Sun and in the sign of its exile. This means that some damage or loss may be caused by attorneys, legal representatives or those who are to give advice. We will probably learn more details as time goes on, but so far it is clear that their legal representatives have not acted in her best interests.

The court and legal decisions that cemented Brintey's life for 13 years took place in early 2008. Previously, Britney had lost her children in a custody battle just as solar arc Mars from the 12th house of the radix reached  in June 2007 Saturn, the ruler of the fifth house. A little later, in October 2007, solar arc Neptune reached Mercury. In August 2008, solar arc Mars reached debilitated radix Mercury, ruler of the 9th and 12th houses. Transiting Saturn, transiting the 12th house, formed a square to Mercury in October 2007 and then in February and July 2008. So we see that Mercury played a prominent role astrologically during these years when the ill-fated legal decisions were made.