When Donald Trump won the election in USA one year ago, the astrological picture that corresponded with his candidacy, campaign and victory was an assembly of major supportive constellations. The culmination of those constellations was in 2016 when his chart showed Solar Arc Sun = Ascendant, Solar Arc Ascendant = Moon-Sun midpoint and Solar Arc Pluto = Jupiter, exact in December 2016. The transit picture corroborated those supportive constellations. Transiting Pluto squared Jupiter, suggesting expansion and power, which in his case was also related to his followers (Jupiter rules his 5th house). Transiting Uranus squared the Saturn, suggesting a brake though in a difficult situation and then there was a Jupiter return, that usually coincides with periods of harvesting some kind of reward.

I do not intend to go through details of his office, his attempts, failures and successes in this text. I want just to sketch the astrological background that corresponds to developments of his position as a president.

Astrological picture for 2016 for Donald Trump

The year 2017 shows transiting Saturn opposing the natal Sun in his 10th house (work, status, goals) which suggests new responsibilities and clarification of political goals, that he obviously had to adjust to the realities of the office he holds. Transiting Uranus square to Saturn in 11th house, the ambition to overcome difficulties, makes last hit in April 2017 and leaves him in a position of victory, but with the established resistance from within the US Congress (transiting Uranus to the Saturn in 11th house activates the resistance). Transiting Saturn makes a conjunction with the Moon, thet ruler of 11th house of support in his horoscope, and corresponds with his battle to gain backing for his goals. He can eventually get this backing partially, with the supportive transit of Pluto square Jupiter, Solar Arcs Jupiter = Pluto, Solar Arc Ascendant = Sun and two more Jupiter contacts to the natal Jupiter position. Changing nature of the opportunities that he had, and in the same time the instability of his goals and perhaps of his position, is suggested by transiting Uranus square Venus throughout 2017, Venus ruling his Midheaven (goals, office, position).

Astrological picture for 2017, for Donald Trump

Astrological picture for 2018 shows more obstacles for Trump. The major constellation in 2018 is  Solar Arc Uranus = Mars, which is a very strong and dominating planet in his horoscope. His notorious impulsiveness, hot temper, risk taking attitude are related to this angular Mars in Leo.  Mars is also in the exact   Jupiter-Neptune midpoint in his natal chart, which can suggest unreliableness and strong speculative nature. This constellation does not implicates a stable feeling for responsibility and dependability, and is especially related to the 9th house issues, ruled by  Mars in this chart: law, ethics, world view, advertising oneself or one's business. Because Mars makes a strong square to the Midheaven, this mindpoint picture is also related to Trump's private business, to the part that has to do with television, with Trump University and the way he uses his name as a trademark. 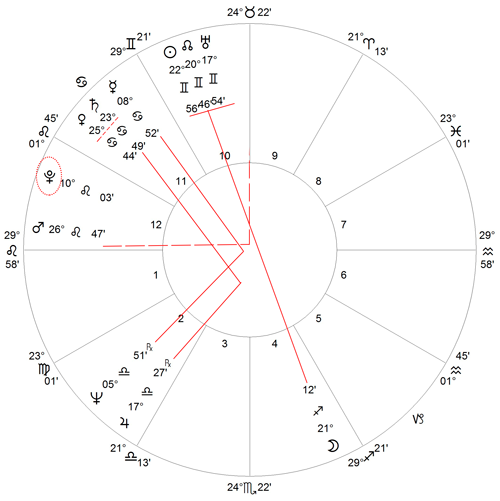 The Uranus arc to Mars in 2018, suggests even more impulsiveness, that can very well be provoked by opponents (Uranus rules the 7th house) and it is further clarified by Saturn that crosses his natal square between Mercury and Neptune: the pressure to disclose possible underhand means or deceit and lies, that he has used so far, related to his presidency or perhaps privately. The natal Neptune is in the 2nd house and rules the 8th, which leaves open the possibility, that the pressure may also be related to financial issues.  In spite of this pressure, it doesn't look to me that he will suffer any serious consequences, such as an impeachment would be. There is  Solar Arc Sun = Jupiter in the beginning of 2019, which does not suggest such a major setback in his life at this point. 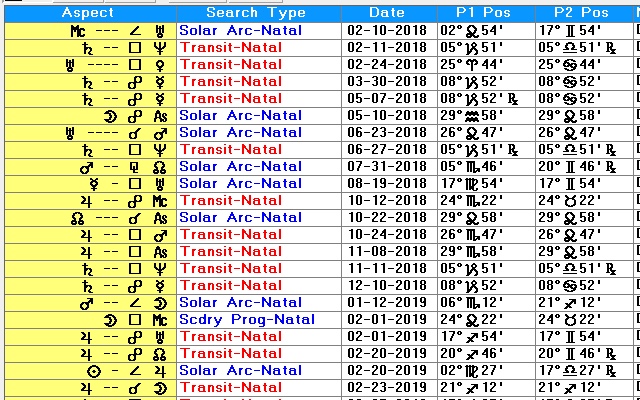 Astrological picture for 2019, for Donald Trump

I would like here to clarify to the reader, that Mercury-Neptune constellation mentioned above, will not necessarily suggest using lies (form of a phantasies, product of creativity too) and underhand means. But the horoscope of Donald Trump  shows enormous need for love, emotional deficiency in early home (Saturn constellations in his chart) combined with strong ego and strong need to cover personal vulnerabilities through aggressive self promotion (Sun Uranus conjunction in 10th house, with dramatic and self-willed Mars in Leo on Ascendant). The way he communicates in order to get  love and admiration and support for his goals (Mercury is in 11th house), or to improve his financial assets (Neptune is in 2nd house and rules the 8th) is channeled through Mercury square Neptune: he could use his creative phantasy to decieve others, in order to assure that thigs are done his way (Mars in Leo). And I think it is save to say by now, that besides speculations and risk taking, he uses lies excessively (see also the documentary "You've been Trumped" about his business methods in Scottland). 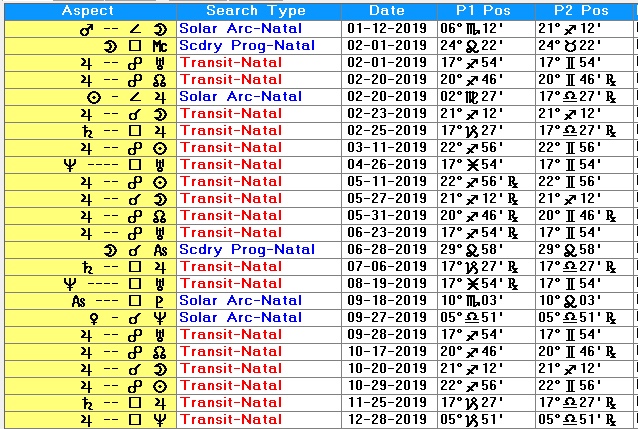 Astrological picture for 2019, for Donald Trump

The year 2019 seems to further destabilize his position, especially in the second part of the year. We see  here Solar Arc Ascendant = Pluto in 12th House and Solar Arc Venus (ruler of his Midheaven) = Neptune. Transiting Neptune from his 7th house (the public) squares Uranus in his 10th house (status, goals, position) and brings shaky conditions, initiated by his opponents or by public pressure. Furthermore, there is Solar Arc Mars arcing to the Sun/Moon midpoint, witch in the case of such a prominent politician, may represent some kind of political and legal attack (Mars rules his 9th house). But the astrological picture does still show some supportive aspects with the transiting Jupiter in opposition to Sun in 10th house and in conjunction to Moon in the 5th. I expect that certain political interests in 2019 may still mitigate the consequences of the pressure that Donald Trump will have. Solar Arc Mars to the midpoint Sun/Moon, which is exact in December 2019, and which  for a politician of his exposure can suggest an attack on position or office, is valid also for the 2020, and when we see a potential of a serious loss of support for Donald Trump. 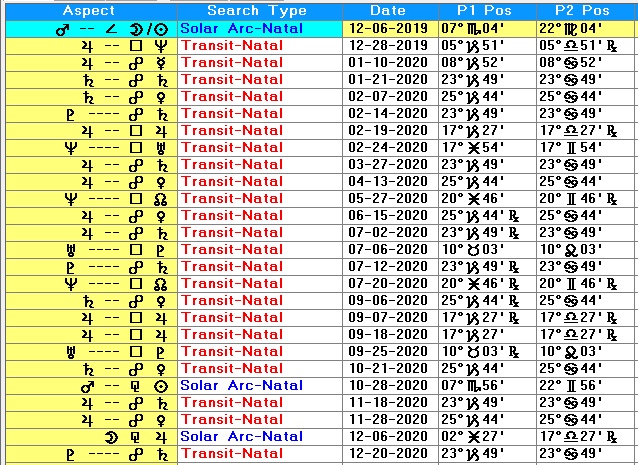 Astrological picture for 2020, for Donald Trump

Transiting Pluto in opposition to Saturn in 11th dominates the picture in 2020, together with the transiting Uranus squaring from  his 9th house (law issues, international politics too) the natal Pluto in 12th (secret deals and similar). We see here also Solar Arc Mars to Sun, which can suggest again an attack on his position. Transiting Saturn makes opposition to Venus in 11. House, the ruler of his Midheaven: this is another sign of pressure upon Trump's position and support he has.

It looks to me, that if it happens at all that Trump is removed form the office before his term ends, that could happen towards the end of 2019 or in the beginning of 2020. But it is more likely that  he stays in office, and his re-election campaign in 2020 becomes a major loss for him and that he will not be re-elected for the second term.