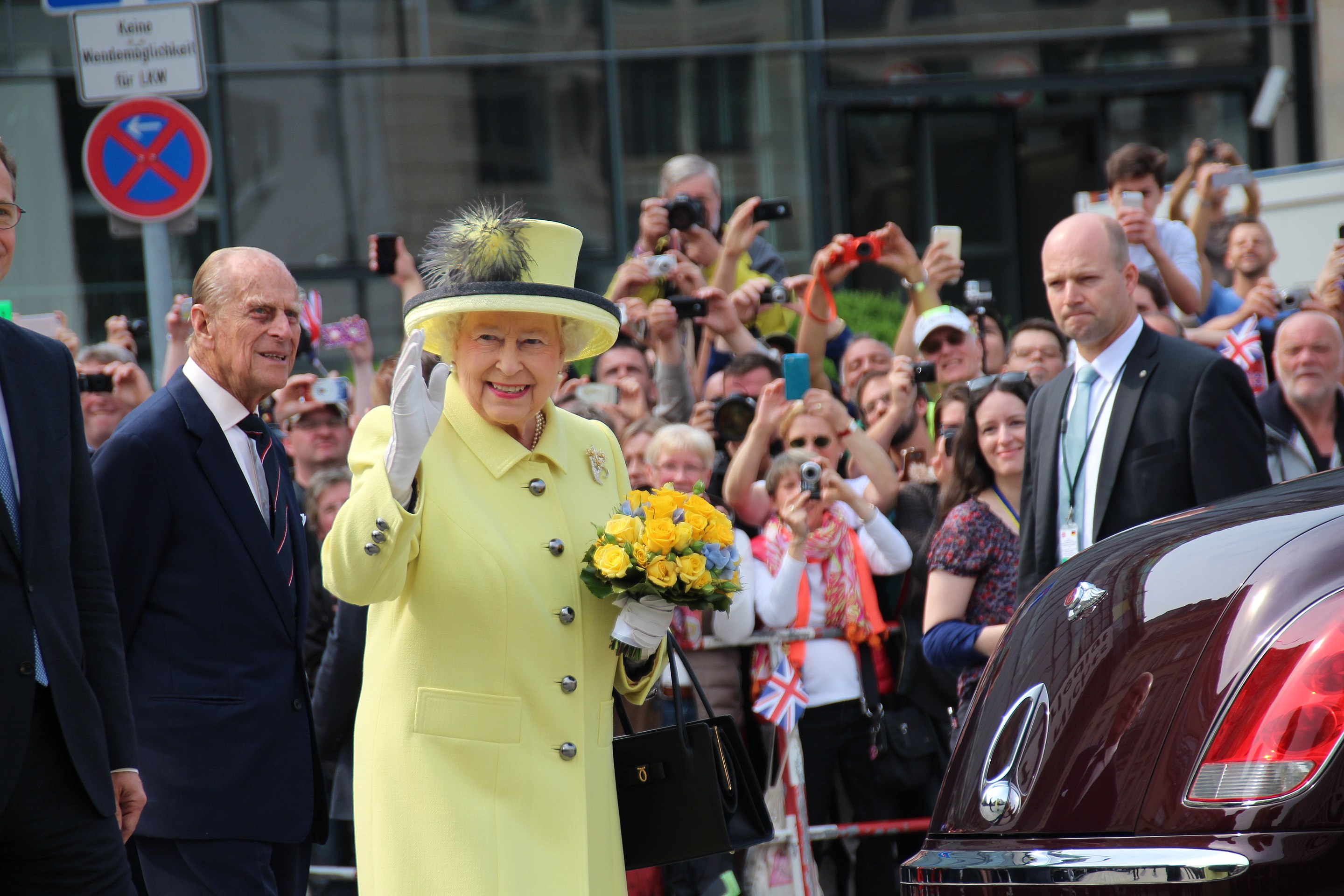 Queen Elizabeth II, the longest reigning monarch, died on September 8, 2022, at 96. This event marks a new era for the citizens of England. The symbolic significance of the English monarchy appears to be gaining further strength through the use of mass media. The coronation of Queen Elizabeth 70 years ago was the first televised coronation. Her funeral and the proclamation of a new monarch in England is a profitable media event in many countries. Lulled by the mainstream and pomp, we may forget that the symbolic significance of the British monarchy may have a different dimension for other parts of the world that are less dominated by whites. I can refer the reader to the video from Democracy Now “Roundtable: Amid Tributes to Queen Elizabeth, Deadly Legacy of British Colonialism Cannot Be Ignored”

In any case, it is exciting for an astrologer to view events against the backdrop of the art she practices. So I write down my astrological reflections here and limit myself to Queen Elisabeth in the context of mundane astrology.

We see that the Moon Nodes fall across the MC-IC axis at 25 degrees of Taurus and Scorpio. The MC-IC axis of the natal chart of Queen Elisabeth holds the same degrees: 25 Scorpio for MC and 25 Taurus for IC. The South Node, which traditionally signifies malefic influences, is closely conjunct to her natal MC and Saturn. While MC is the point that relates to the profession, Saturn is the ruler of her Ascendant. This configuration is the malefic influence upon the vitality and visibility of the Queen. So immediately, we see that the period that starts from March 2022 will be critical to the monarchy. 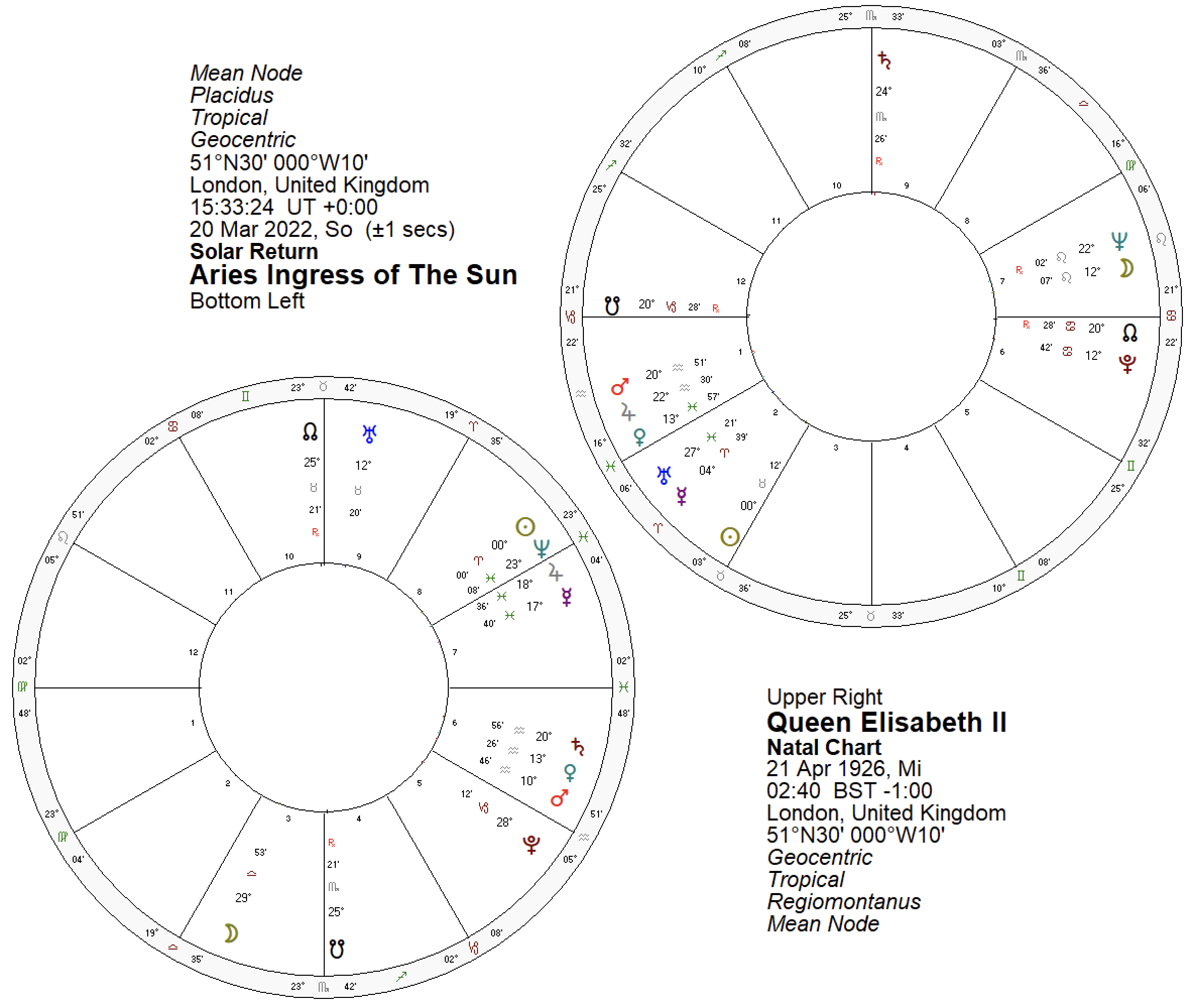 In the horoscope of Aries Ingress, the ruler of the 10th house, Venus, represents the monarch. Venus is weak because she stands between the two natural malefics Mars and Saturn, and is besieged. More significantly, Venus applies to Saturn. Saturn rules the turned 8th house, the house of the monarch's death, and squares the MC and the nodal axis, which is a bad influence in this horoscope.

The Lunar Eclipse at 25 Scorpio that followed in May aggravated further those testimonies. The eclipses are New or Full Moons that happen on or near the ecliptical degrees of the Moon Nodes. They cause darkening of the lights and astrologically signify strong effects, depending on their configurations with other parts of a horoscope. We see here that the Lunar Eclipse itself is squared by Saturn in Aquarius.

The horoscope of the solar eclipse interweaves tightly with the horoscope of the Aries Ingress and the Queen's natal horoscope. The aspects reiterate so much that you may feel that I am repeating myself in the following lines. But actually, it is an interesting repetition of the configurations. So let's take a look. 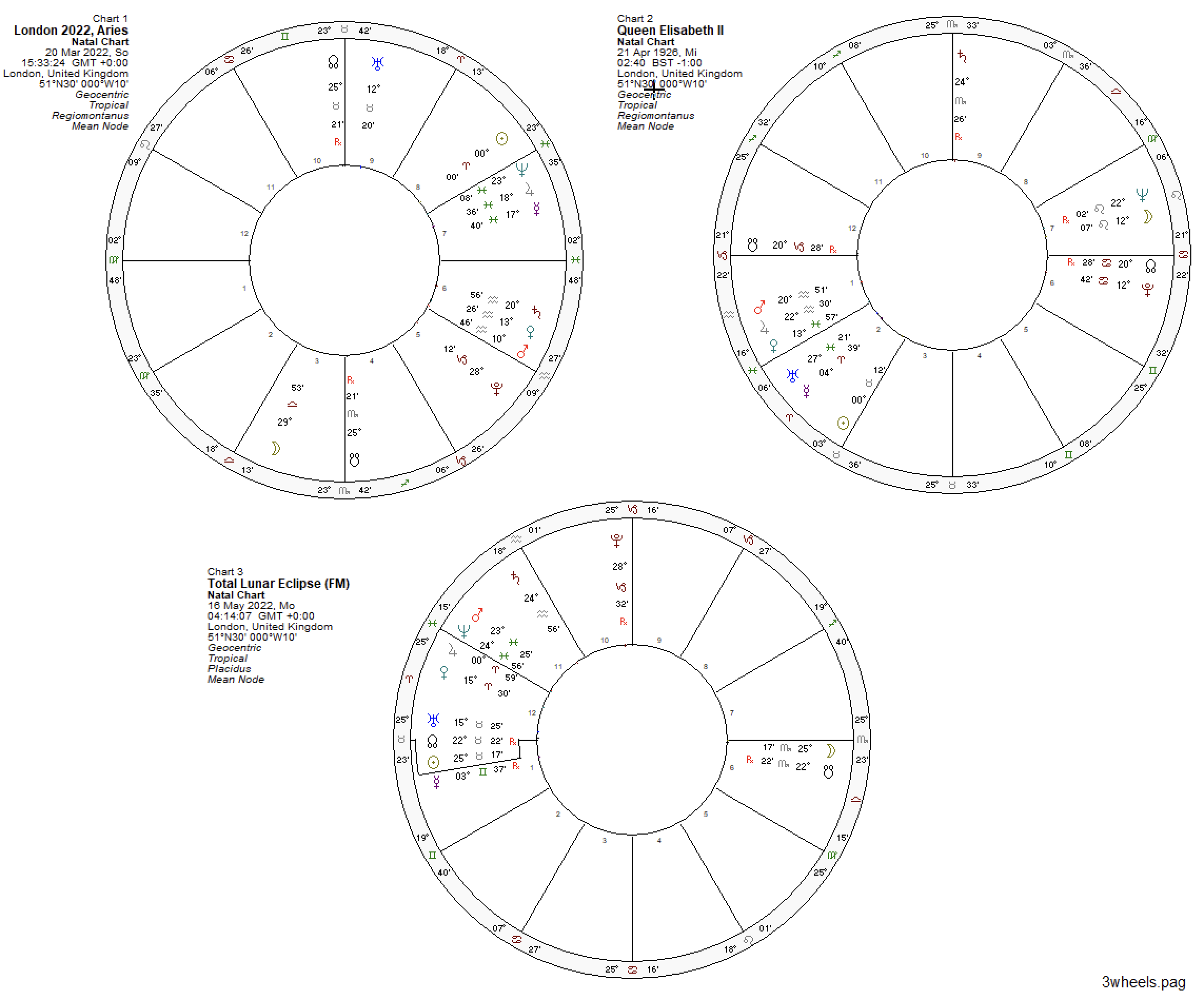 Another interesting fact is that this eclipse horoscope for London is also a sunrise horoscope. That is another indication of how important this eclipse is and that it's symbolism of change brings the possibility of the monarch's death and the end of her reign.

It is interesting how Prince Charles’ natal chart plays into all this. His natal Sun is on the 4th cusp of the Ingres horoscope. He is here depicted as being “opposite” to the monarch. I read that as a “shadow monarch” since the 4th house is a dark, invisible house. We know that he has taken some duties from the Queen in the months preceding her death. 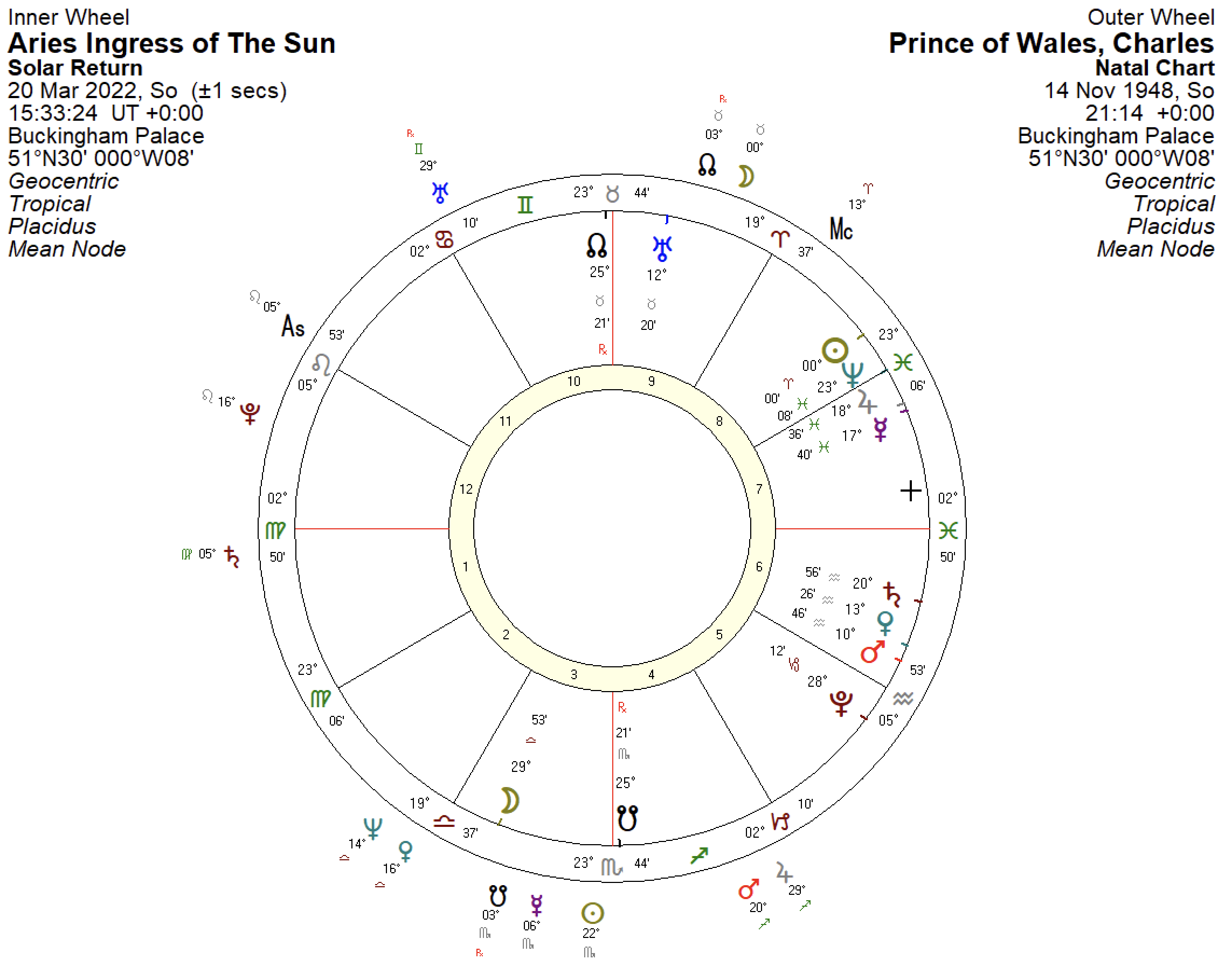 The lunar eclipse in May 2022  lines up with his natal opposition of the Sun and Moon. The Sun rules his Ascendant, and the Moon in the 10th house represents his mother, the Queen, and his worldly status changing from Prince to King. Charle's natal horoscope carries the possibility of him gaining status through a loss related to the symbolism of his mother, because the Moon, the ruler of his 12th house, is placed in the 10th. 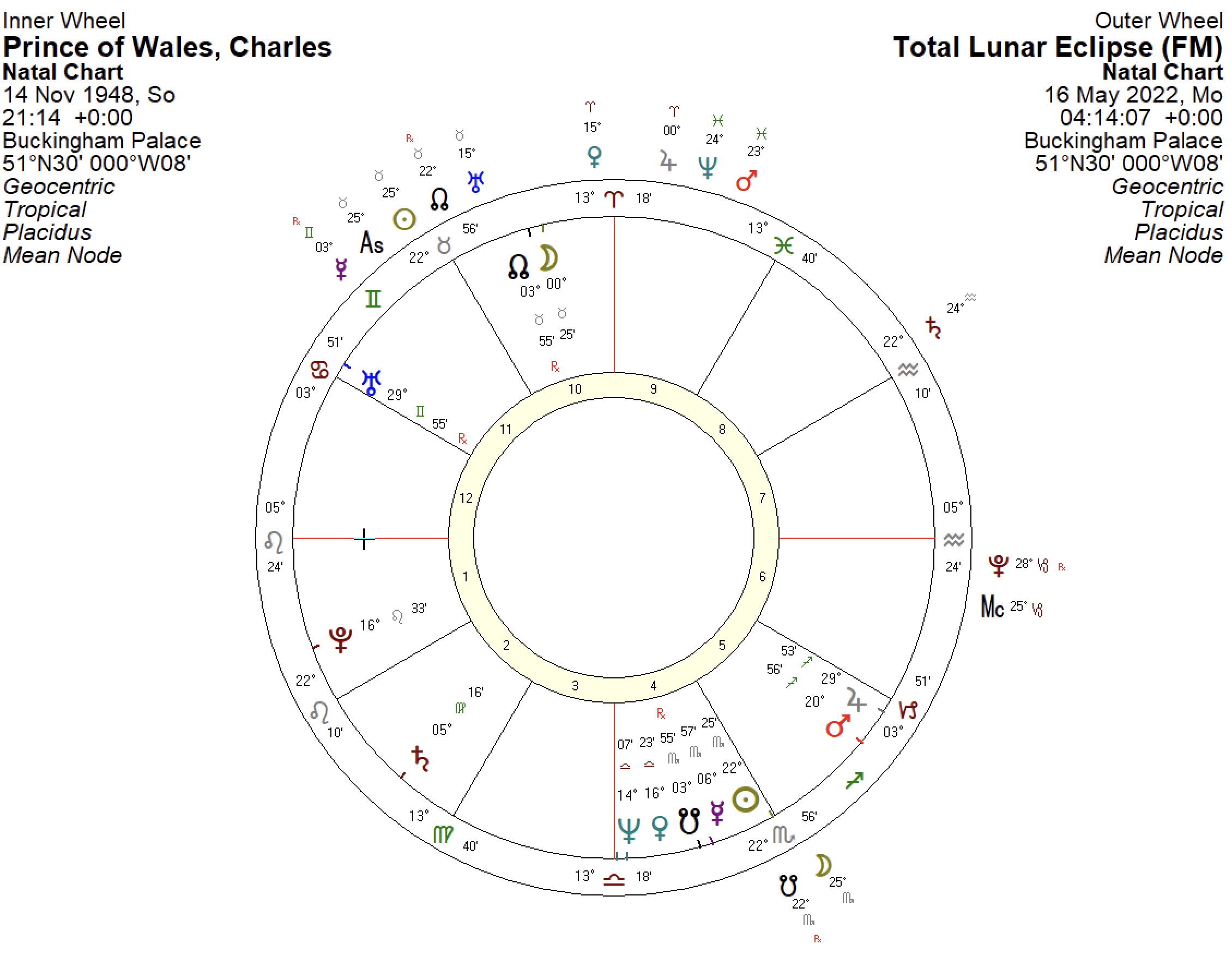 Queen's natal chart does suggest a similar potential. We see there that the ruler of her 12th house is Jupiter, which is conjunct with Mars, the ruler of the 10th. The loss and professional advancement are also related here. Elevated Saturn plays into the symbol of her father, whose death promoted her to a Queen.

The upcoming Libra Ingress horoscope is also astrologically interesting. It holds almost the same degrees on its angles as King Charles’ birth chart. This Ingress symbolically fits his promotion to King and affirms it. His 10th house Moon falls in the 10th house of  Ingress. 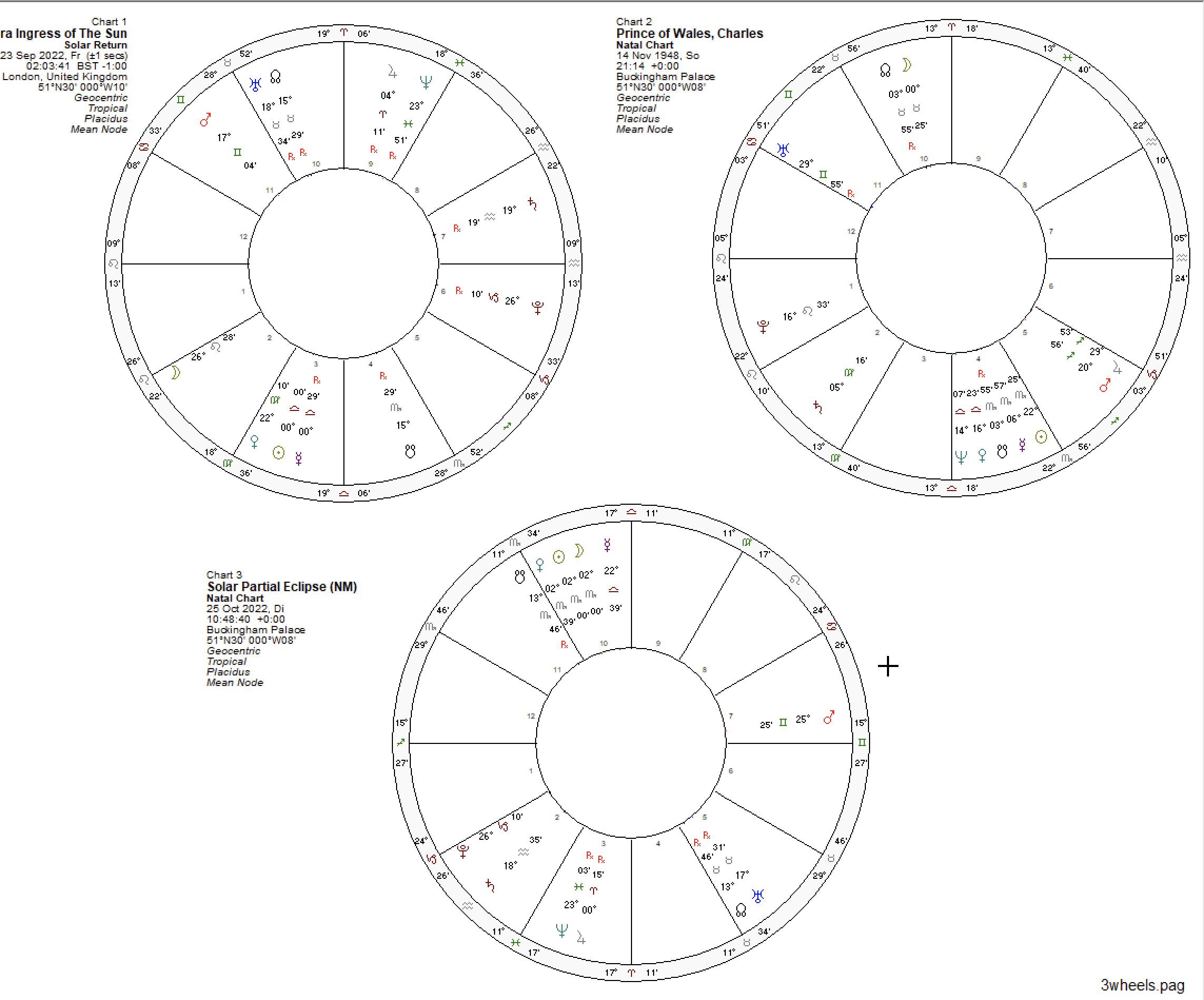 The 10th and the 4th houses of the Ingress are debilitated.  They hold the Moon Nodes which are squared by Saturn from the angular 7th house. I think this illustrates the current situation in England well. At least as far as I have read about the situation there. The South Node in the 4th house of Ingress can suggest the diminishing resources and supplies for the nation, which come from the ground, including the gas supplies needed for electricity. (1) Saturn is in the house that signifies international conflicts, which reflects the conflict with Russia over the war in Ukraine and its influences.

Another testimony that corroborates the kind of crisis that awaits Charles immediately is the upcoming solar eclipse in October 2022. The eclipse falls in the 4th house of Ingress and opposes Charles’ natal Moon, thus corroborating the decrease in supplies and the resulting problems for the UK and the new King. At least in the period of the Liba Ingress 2022.

I may look at the UK horoscope in more detail another time. For now, I wanted to point out this fascinating connection and repetition of astrological symbolism, that all point to the same outcome and the death of the Queen Elisabeth.

(1) The fourth house in mundane astrology signifies “supplies that feed the nation from underground – such as water reservoirs or the gas industry”.  Deborah Houlding “The Houses. Temples of the Sky”, The Wessex Astrologer, 2006.