Gerard Depardieu is having a different kind of limelight lately: taxes, geographical relocation and citizenship are the themes in the media. Astrological trend analysis for his horoscope shows interesting correspondences.
Two Solar Arc constellations suggest the latest themes for  the actor . Solar Arc Mars = Uranus and Solar Arc Pluto = Saturn are both exact in December 2012 and have  an influence for 6 moths before and after that.

Mars in contact to Uranus suggests excitement,  "quick determination" *, irritability, impulsivity. Uranus rules the 2nd house in this horoscope and is related to his wealth and to his value system.  Because Uranus is positioned in the 7th house, this also puts focus on his publicity and public identity. #

Natal Saturn is placed in the 8th house of taxes and liabilities. Solar Arc Pluto is making a semi-square to the  Saturn. Among other things, Pluto symbolizes groups in the widest sense of this word, groups that follow certain programs, rules or norms. It represents the powers of the environment that can make a pressure upon the individual: in this case this is the French State and the announced new tax system which made Depardieu react and cause media interest. Saturn is the co-ruler of the 1st house and suggests that there is a profound personal change going on within Depardieu. I do not know details from his life, but it is apparent from the transit picture, that this is only a stage in the transformation process that has started in 2006 with Pluto transit over the Ascendent. 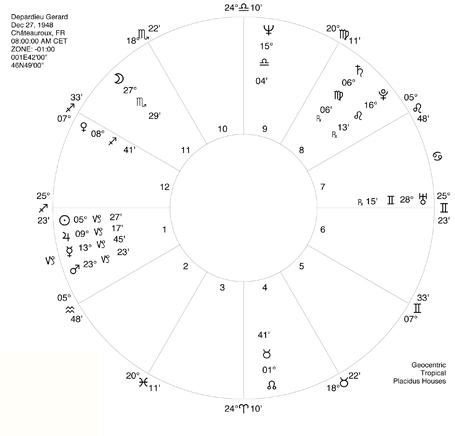 Another interesting picture is transiting Pluto in conjunction with the 1st house Jupiter, that made its 1st hit in March 2012. The third ,from five hits that Pluto is going to make, was exact in December 2012. Transiting Pluto in conjunction to Jupiter,  the ruler of the Ascendent, suggests a change of personal perspectives on the inner level, and, if the reality context allows, a geographical relocation on the outer level of excpereince. Jupiter symbolizes also the legal side of things and we see here the correspondence to the change of the citizenship. This transit is active until the end of 2013 and may also suggest the expansion of business activities that accompany these changes. (Transiting Pluto = Jupiter on 3,5,12/2012 und 8,10/2013).

Simultaneously, the transiting Uranus makes a square to the natal Sun (4,10/2012 and 1/2013) and suggests a drive for change and  for more freedom.

The secondary progression Moon can be used  as a timer. It makes a square to the Ascendant-Descendant axis in december 2012 and a square to Uranus in March 2013: focus is on affairs that have to do with his environment and his self-presentation. Square to Uranus highlights also his value system, his wealth and once again his public projection and public identity.

That russian citizenship may offer  Gerard Depardieu some promising new possibilities for business is suggested by transiting Uranus square to Jupiter in 2013 (4,11/2013 und 1/2014).
It is also interesting to mention in this context, that decisions that an individual makes are always closely related to his or her psychological make-up. Of course, the individual circumstances will also strongly influence the possibilities and decisions.
Without wanting to go deeper in the analysis of the natal chart of  Gerard Depardieu, I would draw attention to the Jupiter, the ruler of the Ascendant, in his natal chart.
Jupiter symbolizes our connection to the world, and on the inner level, the reward that we hope will results from our personal effort.  here the Jupiter is in Capricorn and suggests that material success and social status motivate actions of Gerard Depardieu. The Capricorn Sun and Scorpio Moon combination makes also an interesting statement in this context: " ..the ambition ties in with tremendous drive and temperament... Emotions do not interfere with the reasoning. This is the decision maker. Compromise is learned, but the trade-off is in one's own benefit, for sure."**
* Reinhold Ebertin "Kombination der Gestirneinflüsse"
** Noel Tyl "Synthesis & Counseling, The professional Manual"