The Sun-Moon modification and planetary aspects

Sun in Libra with Pisces - Moon

When I wrote about Berlusconi and the influence of Uranus-Pluto Transit on his horoscope,  I was astonished to discover that he was born with Sun in Libra and Moon in Pisces. The Libra Sun with the Pisces Moon suggests a sensitive and delicate personality. When we think of Moon in Pisces we think of sensibility, compassion and creativity. The egoistic features, that come across through the medial representation of Berlusconi's behavior and statements, is usually not associated with this combination.

So what is it that modifies this Sun - Moon combination so much to convey the image of an egoist, trickster and unscrupulous person? 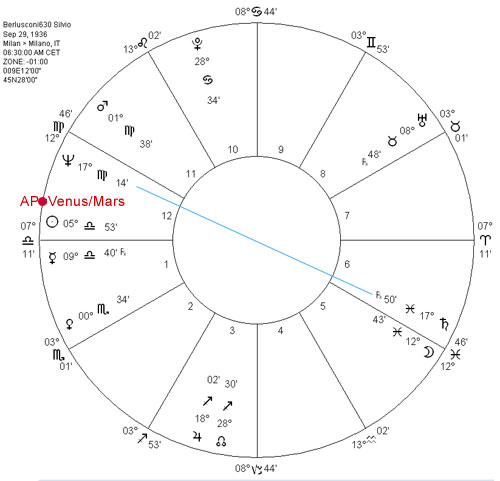 What we see first is the retrograde Saturn that makes a conjunction with the Moon.  This astrological picture suggests the habitual control and suppression of feelings, an emotional pattern that is obviously strongly related to early home dynamics.  Saturn symbolizes limits and controls, and here it correlates to personal boundaries  and self-protection. In order to create emotional security,  the Pisces Moon employes the sensibility within emotional tactics and hidden maneuvers. In this picture the innermost sensitiveness and needs feel endangered by parental controls and expectations. The self-protection need becomes very strong. That is why the Moon in conjunction with the Saturn can suggest egoism and  selfishness - it is the self protective pattern of behavior that goes to extreme.
The opposition to Neptune in the12th house does not soften this reining emotional pattern, it veils it at most. The constellation with the Neptune suggests the root of this self-protective pattern that is propelled towards egotism: the painful and emotionally unfulfilling relationships with his father. The Libra Sun with its energy to please others  shines thought the Moon and paints a picture of a son that wants to win the love of the father. That is another pattern of behavior, also reflected in the life of Berlusconi: he made his first business with his father's help. And the father  was up to his death in 1989 closely  involved in his son's businesses. (Berlusconi Zampano - Die Karriere eines genialen Trickspielers  By Udo Gümpel, Ferruccio Pinotti)

Another point worth mentioning, although not directly related to the  theme,  is the midpoint of Venus and Mars that is positioned on the Aries Point. This suggests that Berlusconi has a need to project outwards his love life or love potency and to stage beautiful women as a part of his personality - Venus is the ruler of the Ascendant  and Mars rules the 7th house.