After years of influencing law in Italy, Silvio  Berlusconi was convicted of tax-fraud in August 2013 and sentenced to four years in prison. In November 2013 he was expelled from the Senate and striped of his parliamentary immunity.

There are three different times of birth for Berlusconi  in Astrodatabank. The horoscope for 6:30 AM shows angles with 7 to  9 degrees of cardinal signs which correlates well with  developments in his political career and with transiting Pluto-Uranus square affecting the axis of his horoscope. 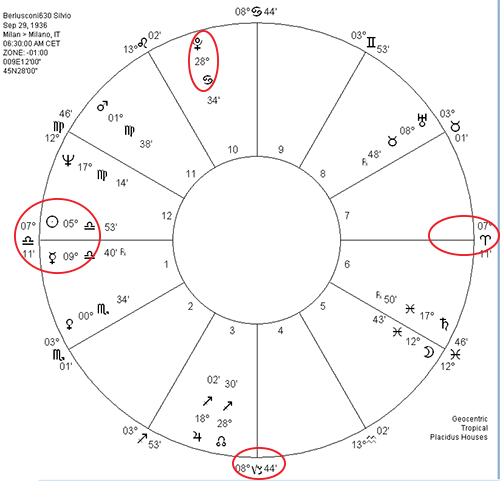 November 2013, when Berlusconi was expelled from the Senate, shows several significant astrological measurements: the second hit of transiting Uranus in opposition to Mercury, the last hit of Pluto in square to Mercury and Secondary Progressed Moon in opposition to MC. Mercury rules the 9th and the 12th house in this horoscope: issues related to legality, law  and to behind-the-scene activities are changing against expectations (Uranus)  and possibilities in this regard are going through deep and thorough transformation (Pluto).

In August 2013, when Berlusconi was convicted,   transiting Jupiter crossed MC, Ascendant and natal Mercury. We can see here that the results of the  expansion and inflation that Jupiter suggests depend on the real circumstances and are as well based on personality itself and on its past decisions, actions and events.

Looking  back at 2012 we see that transiting Pluto opposed his MC while transiting Saturn made a square to natal Pluto in the 10th house of career and public position. This is the astrological picture of dramatic change of perspective professionally and socially,  accompanied by the possibility of loss.

Another look back at 2011, at the year when Berlusconi resigned as Prime Minister after holding that position for almost 10 years, we see that Pluto made a very long passage over his Ascendant, squaring it until October 2012  and also squaring the Sun.  The last hit of Pluto to the Sun was in November 2011, the month of the resignation.

Because we have transiting Pluto - Uranus square in cardinal signs going on for some years now, the cardinal points in Berlusconi's horoscope will almost simultaneously be affected by Uranus too.  Transiting Uranus made opposition to Berlusconi's Sun and Ascendant in 2012 suggesting changes in his political and business partnerships as well as changes of  his personal position of authority . In 2013 transiting Uranus made twice opposition to Mercury. If the personality and circumstances show a tendency toward extremes, Uranus can suggest escalation of situations which applies here in Berlusconi's case. Transiting Uranus will make its last hit to Mercury in February 2014 so we can expect the aftermath of Berlusconi‘s conviction and expel from Senate around that time.

Actually, as Berlusconi seems to have difficulties with any kind of drawback and giving up, and becasue he seems to be convinced in his invincibility, the aftermath may be prolonged: Solar Arc picture shows Pluto reaching Mars ( the ruler of the 7th house) in 2014, Solar Arc Uranus reaching Moon ( the ruler of MC)  and Solar Arc Mars reaching Sun in 2015. This picture suggest the will to fight the obstacles,  opponents and  to stay in power.  And Berlusconi  still has many different means at his disposal.