The following text was written in the year 2014. To read the astrological analysis of the horoscope of the independence of Ukraine and the crisis in 2022, please click on the following line: The Ukraine Crisis in 2022 and the Pluto-Uranus Cycle

The happenings in Ukraine that from January 2014  onwards escalated in a conflict and in a declaration of independence, reflect a tendency of the Uranus-Pluto square, that is drastically expressed through events such as mass demonstrations in Iran in 2009 and later, crisis and riots in Greece from 2010, in the so called “arabic spring” and conflict in Syria from 2011.

Astrological symbols are multilayered in their meaning and that corresponds to the complexity of life itself. Pluto is a symbol of organized groups, be it nations, corporations, associations, lobbies or parts of the population, whose members are linked through shared interests and who make official or unofficial rules that serve that interest. In that sense, Pluto symbolizes the masses and mass movements just the same as it symbolizes the capital companies in the broadest sense. All this organized and through shared goals regulated groups posses power that they can exert in their particular realm. On one another level, Pluto symbolizes loans, debts, interest rates and insolvency. As a process, Pluto symbolizes reorganization and restructuring.

Pluto's entrance in Capricorn announced a reorganization of the existing system. That does not promise of a new social system or organization, but an adjustment of the existing one, that is a product of certain developments. Before Pluto entered Capricorn, it was in Scorpio and in Sagittarius. If we look at the power structures in societies and their interests, we see the  one-sided regulations and restructuring in the financial industry in the time of Pluto in Scorpio (1983 – 1995). Business with credits, debts and interest rates corresponds to the sing of Scorpio as well as the inclination towards intensity and one-sidedness. Regulations that developed when Pluto was in Sagittarius (1995-2008) supported freedom, risk, speculation and world wide expansion of economic powers.

Uranus symbolizes the  urge for renewal, for crossing the established boundaries, and on the financial level, it represents the movement of the capital.  Uranus is not a democratic planet. It is concentrated on self-interest and it operates in an authoritarian manner. In the sing of Aries, it symbolizes an urge for supremacy.
So we see that the dynamic relationship between Uranus and Pluto, that is described as revolutionary, libertarian and explosive, relates strongly to the economic tendencies and (political) decisions of the interest groups, as well as it relates to the economic and geo-political supremacy of the world powers. All upheavals and wars in the last years are related to the restructuring in this sense. The effect of this square will correlate to the state of affairs in a particular country as well as to the influences it is exposed to. 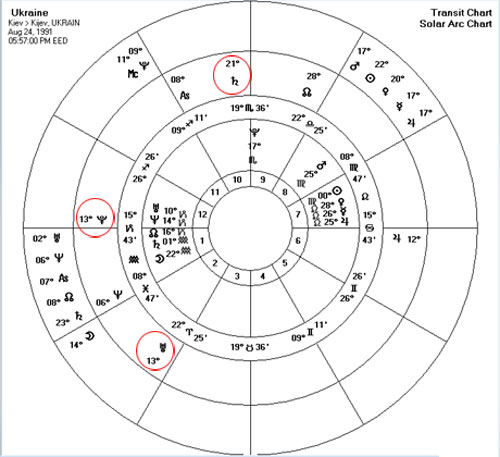 In the chart of the Ukraine we see that Solar Arc Uranus reaches Saturn in October 2013. This astrological picture symbolizes powers that rebel against the system and want to change the existing one.  In the same time, Solar Arc Mars reaches the square to the Moon Nodes, what suggests the cooperation between people and people's movement. Transiting Pluto makes conjunction with the Uranus in the 12th house throughout 2013 and it mobilizes the powers that want to change the status-quo.
Saturn transits the Pluto and the Midheaven from December 2013 until summer 2014. This suggests pressure for the government, and in the extreme case, it can suggest the use of force. Transiting Uranus made its last square to natal uranus in February 2014, just before the culmination of the situation with the independence of Crimea.
In June, when Saturn crosses the Pluto and the  Midheaven for the second time, transiting Uranus will make a square to the Ascendant.
This suggests the further escalation and division of the nation, represented through the Ascendant. Transiting Saturn crosses also the Moon in the 1st house from the January 2014 until the end of the year, and that stresses once again the  difficult situation and separatist tendencies.
The last transition of Saturn over Pluto and Midheaven is in August 2014, simultaneously with the second transit of Uranus over the Ascendant. This should be the last escalation through the use of force, even though that does not means quietening down, because Uranus will make its last square to the Ascendant in March 2015, and a bit later it will transit the Moon Nodes. That is a picture of the continuiation of the political unrest.

Read more about Uranus in: