In my earlier post on relationships I looked at predispositions for a brake-up. These are to be found within the personal needs and individual motivations for relationship in each partner. Now I will look at horoscopes of a long term celebrity couple Oprah Winfrey and Graham Stedman.

While date and time for Graham Stedman’s chart are known, the birth time information of Oprah Winfrey is uncertain. Nevertheless, we can gain enough insight from the planetary configurations to understand the bond between the two. I will forego the physical attraction (see here) and search deeper for what holds these two people together more than 30 years.

The Graham Stendam's chart of shows strong emphasis on Pisces and the 4th house. Both Sun and Moon are within the Pisces stellium. This suggests high sensitivity, openness to impressions and strong empathy. Subliminal forces direct behavior, one is drowned by feelings and such amount of sensitivity may render person vulnerable. The is a strong need to understand impressions and facilitate dealing with feelings that are stirred up so easy. Spirituality comes from the same need, introspection is emphasized because feelings need a structure 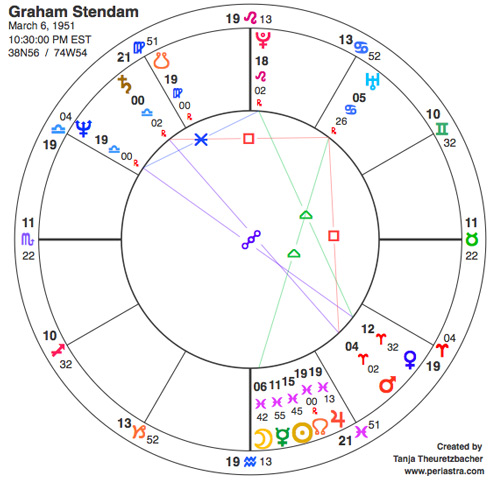 T-square with Saturn, Mars and Uranus as the focal point suggests strong personality, individualism and love for freedom. This configuration adds energy and executive power to otherwise dreamy and lethargic Pisces emphases. Mars and Venus in Aries imply strong need to assert and prove oneself in relationships. In the same time he needs a partner that perceives and appreciates his markedly emotional being.

Relationship planets in Aries, and Sun-Moon blend in Pisces that is already occupied with own inner life, could lead to extremely subjective attitudes and world views that might prove problematic in many areas of life. Jupiter in Pisces in the 4th house dreams of a soul mate to establish emotional security and safety. In order to establish or keep emotional balance  Graham Stendam needs someone who understands him and his personal emotionally  distinctive relation to the world. Soul connectedness is of outmost importance for him.

In the chart of Oprah Winfrey, with her Aquarius Sun, Venus and Mercury combined with Sagittarius Moon, we see strong interest in people and altruistic attitude. There is an ability to transform emotions and passions into ideas and concepts. This results in a philosophical understanding of the world and people.

Oprah's passionate nature is strong, as signified by T-square with Pluto, Mercury and the focal planet  Mars in Scorpio. This astrological picture suggests once more ability to divert the passionate energy into higher goals according to Moon in Sagittarius vision.  This is also valid for her relationships.  The square between Saturn in Scorpio and Sun in Aquarius adds deep insight to the combination. 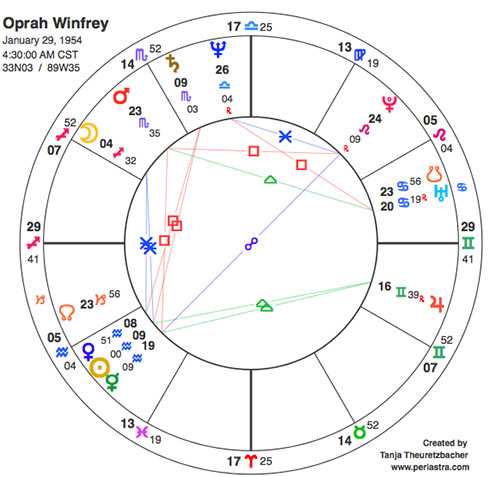 Venus and Sun in Aquarius seek friendship in relationships above all, so mutual trust and support are truly important. Besides independence and much free space, her Moon in Sagittarius needs a partner that admires the well developed intellectual capabilities and broad world view. If also the higher goals and visions can be shared, Oprah has found her perfect match.

What we see in these two horoscopes, is that needs and motivation for a relationship are compatible. Oprah can find philosophical understanding for emotional depths and subliminal drives of her partner. She provides thus not only the emotionally safe harbor but also facilitates his need for self-understanding and objectification. Furthermore, his emphasized empathy and feeling nature can gain clear structure and direction through Oprah’s altruistic orientation and higher goals that she cultivates. Oprah receives admiration and sympathetic understanding not only for her intelligence and wisdom, but also for her unconventional life style that keeps her busy and likely not much available for private romantic moments. In this combination, the physical absence of a partner won’t influence the course of relationships, because the intimately important bond is made on another level.

Nonetheless, even such horoscope combination does not guarantee that the couple will stay together. Much depends on individual history and on how one has learned to deal with dispositions and potential suggested by the horoscope.

For example, were the opportunities to get away from abusive environment and lack of support missing in her life, the social interest and needs indicated by Aquarius Sun square Saturn in Scorpio could have developed into general mistrust in people, even misanthropy. That would make a fulfilling partnership difficult to achieve. On the other hand, when Pisces are emphasized as  in Stendam’s chart, and if  understanding parent was missing or there were no religious or other spiritual and emotional agents to facilitate abundant sensitivity, an extreme touchiness that entangles emotional expression could develop. That could lead to an enormously  gloomy world view. If that were the case, the probability of comparability would be drastically diminished.