The astrological analogy to the current european crises can be found in the synodic cycle of Jupiter and Saturn. The culmination of any synodic period is reached when two planets build the opposition, and this represent the crucial test for tendencies that started to develop with the conjunction.

The Jupiter-Saturn conjunction that took place in Taurus in 2000 suggests financial and structural themes that will occupy Europe for next 20 years, until 2020.

So we saw the implantation of the Euro-banknote in 2002, and the EU enlargement in 2004 that corresponds with the Jupiter-Saturn sextile. The square between these two planets in 2005 coincides with the rejection of the EU constitution. With the Jupiter-Saturn trine the Lisbon Treaty that foresees the closer cooperation among European states  is signed and the EU was enlarged for two more states.

But only when Jupiter-Saturn cycle reached the opposition, the challenges become a serious test for the European Union. Pluto, the planet of transformation that symbolizes debts and financial world among other things, enters Capricorn in 2008 and squares the Jupiter-Saturn opposition by the end of 2009. This defines the focus of the EU crises that is expressed through the opposition – the sovereign debt crisis in Greece. Drastic austerity measures, that were supposed to prevent the bankruptcy,  were prescribed to Greece.  Not only that the sovereign depth rouse with time in this EU-country, but also the social unrests and general doubts about european currency, even about union survival.

The Uranus enters Aries for the first time in May 2010, for the second time in  April 2011 and joins the Jupiter-Saturn opposition by making a conjunction with Jupiter. This is exactly the time period of the Arab revolutions that spread and enclose Syria by April 2011. These events in  North Africa and western Asia will not be perceived as a proximate danger for Europe, that struggled with its debt crisis in that moment. In 2013 Saturn and Jupiter make a trine again and EU expands with Croatia as a new member.

At this time Uranus and Pluto have formed a square that will last until late 2015 and reach its end phase in 2016.  This square corresponds with the further intensification of the debt crises and with the upheavals and escalations in the Arab countries, especially with the war in Syria and conquests of Islamic State.

By the summer 2015,  when people fleeing destruction in Near and Middle East reach European borders through Turkey, Jupiter and Saturn made a closing square in their cycle and introduced yet another european crisis  - the present refugee crisis. Unfortunately,  this humanitarian catastrophe becomes a political issue that discloses another weak points within EU. Jupiter and Saturn are both in mutable sings and they cross Neptune from September to Deceber 2015 which emphasizes again the instability of the situation.

In the second half of 2016, when Jupiter changes to cardinal Libra,  we can expect the quietening of the crises. Until than, the situation can escalate twice, once in the period from February to April 2016 when Jupiter and Saturn again form the square and than again from June to September 2016 when Saturn crosses Neptune again.

Because Jupiter will cross the Uranus-Pluto square from December 2016 until August 2017 and will create the same, although less critical, astrological picture as in 2013-14, there is also a possibility that Greece or another EU country with debt comes into focus and replaces the refugee theme.

The EU crises that increases since 2010 introduces a new phase that will not take another turn before 2020, when Jupiter and Saturn conjoin in Aquarius and start a new cycle. Important reforms will not happen before 2021. 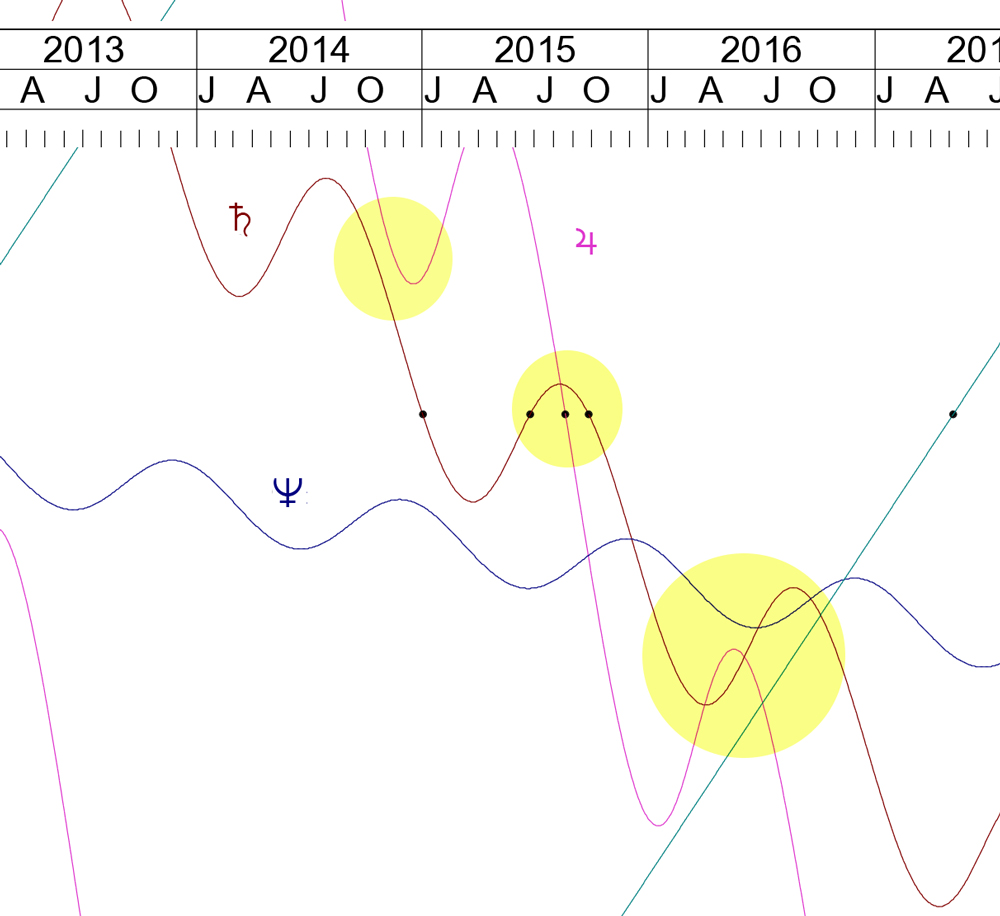