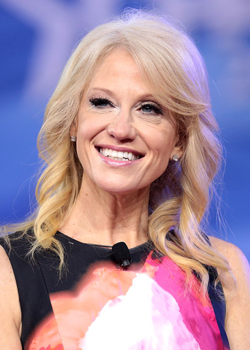 Trump presidency has pushed some new people in the spotlight in America and with them certain narratives, that we in Europe konw as well from the discourse of right to far-right political spectrum. One person from Trump's circle caught my attention: Kellyanne Conway, a woman that undeniably demonstrates intelligence, fast and creative thinking, combative rhetorical abilities, garnished with the display of emotional untouchableness.

Conway is the first woman who run a winning presidential campaign in USA and she is one of the counselors to the current USA president Donald Trump. She is also the person who spontaneously coined the expression "alternative facts", and who at all costs insists on Trumps version of reality. Her notorious way of arguing in interviews is already called Kellyanne Technique. The arguing technique consists mainly of avoiding and denying tough questions by answering questions no one has asked and by being in permanent offensive mode. What Conway actually does in interviews is, she listens to the question and picks up words or concepts that she will use as a starting point to expand into unrelated topics, to blatantly promote Trump and his agendas or to accuse the opposing party of invented wrongdoings.

The birth of "alternative facts" argument 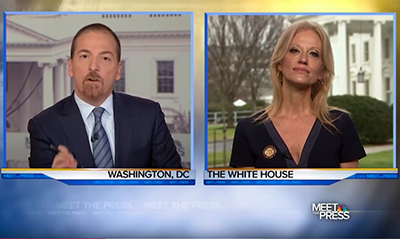 Here is what she did in a notorious "alternative facts" interview. In the context of Trump's claims that he had "the largest audience to ever witness an inauguration", in spite of images and videos showing that is not true, Conway said: "You [the interviewer] are saying it is falsehood [...] and [...]  the Press Secretary gave alternative facts to that. " The interviewer'S reply was: "Alternative facts are not facts. They're falsehoods." In respond, Conway improvised with the word "facts", creating for herself an opportunity to attack political opponents in totally unrelated (and untrue) issues: "Do you think it's a fact or not that millions of people have lost their plans or health insurance, and their doctors under President Obama... ".

The postmodern quality of recontextualization

She used the same "technique" in the Fox interview, when asked to give her view on Meryl Streep's speech. The actress previously publicly criticized Trump’s bullying of the disabled. In this interview Conway started to diversify her arguments and push them again in contexts unrelated to the content of Streep's critic. She accused Streep of not raising her voice against one particular violent You Tube video from "last night", and of "inciting people's worst instincts".

She dismissed the criticism of Trump as an unfair lament over election results: "She [Meryl Streep] sounds like 2014. The election is over. She's lost."  In this context of bullying of the disabled, Conway thematized wealth, luxury and vanity of the Hollywood elite in order to insinuate questionable attitudes and self-absorption of Trump's critics. She talked about Hollywood’s “self-pity”, Hollywood’s disappointment with the election results, while positioning herself on the side of the selfless non-wealthy humble people, by adding “But this is Hollywood. I think where there is self-pity, a lot more self-awareness would do them some charm. Talking about how vilified poor Hollywood is, in their gazillion-dollar gowns. Can I borrow a couple of those for the inaugural, please?” As one American professional speaker puts it, "[Conway has] postmodern quality where words and statements that you may have heard and knew exactly what they meant, she interprets them in a different way."

In addition to all this verbal combativeness, Conway has the ability to stay composed, to continue to think and talk volubly without blinking, no matter how cornered she might be by a question, no mater how blatantly she may operate with the alternative facts.  So I was curious to see what kind of personality hides behind all this, and I took a look at her horoscope.

What kind of Capricorn is she?

In the horoscope of Kellyanne Conway we see Sun at the very end of Capricorn with the Moon in Taurus and with the Pisces Saturn in the 1st house. This combination suggests general calmness of temperament and composure, in spite of strong passions, likes and dislikes that are cultivated under the surface. Discipline and ability to emotionally detach when it is strategically important, is also part of this combination. That Conway can manage her emotions effectively no matter how strong they can be, and that she can seemingly remain unaffected, is further corroborated by the Grand Trine in Water element containing Saturn-Neptune-Jupiter.

Conway's mental abilities are reflected by Mercury in Aquarius conjunct the Sun in 12th house. This is a picture of strong common sense and a very active mind, invigorated by enthusiasm and resourcefulness through Jupiter, which makes opposition to Sun and Mercury. Jupiter enlarges the Capricorn ego, the sense of "I am" , which in this constellation is built upon mental concepts and convictions. 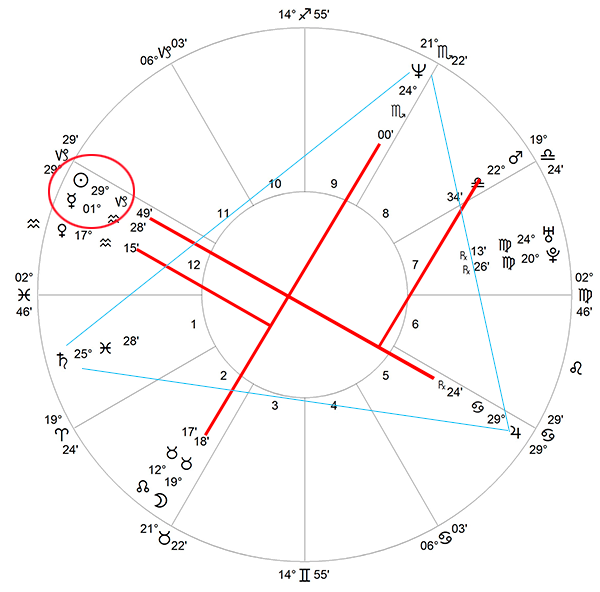 Stubbornness as well as firmly held opinions and beliefs of Jupiter-Mercury opposition, suggest also the tendency to believe that only own ideas are the correct ones, which in this horoscope is the part of defense mechanism. Because the Sun is involved in the opposition, questioning and challenging her opinions is to Conway like questioning her whole personality. The need to justify or defended her opinions and world views is usually demonstrated in challenging situations and this pattern of behavior includes refusing to compromise or change the opinion, even if evidently wrong. Moon in the 3rd house usually comes together with good verbal and mental abilities. In Conway's horoscope the Moon is in the 3rd house and builds the opposition to Neptune:  this constellation suggests a pattern of behavior that ignores facts in situations in which the person feels need to protect oneself. Ignoring or misinterpreting the facts can than create the feeling of security. In addition to that, mental resourcefulness suggested by Mercury-Jupiter aspect, can turn into exaggeration and dramatization.

This psychological patterns and abilities are accompanied by great energy and enthusiasm, suggested by Mars square to Jupiter,  that is fueled by dogged determination of Taurus Moon. Mars - Jupiter combinations are in astrology often referred to as a "crusader" combination.
Mars makes also a wide square to the Sun. This is a picture of courage, aggressiveness and inclination for taking risks. Because Conway’s horoscope is a mental one (1) these personal traits are lived out in the realm of ideas, through mental aggressiveness and argumentativeness.

What Conway is also doing a lot in her arguments, is that she represents herself and her boss Trump as victims of the media. Presenting oneself as a victim of repressive double morality is typical communication strategy of far-right movements worldwide. But in my opinion, Trump genuinely believes that he is victimized by the press. The mind set of notoriously seeing oneself as a victim can often be found in horoscopes with strong Mercury - Neptune square or conjunction, when Saturn additionally supports the feelings of inadequacy or not being lovable. This applies to Trump's horoscope with Mercury in 11th house square to Neptune in 2nd, together with Saturn-Venus conjunction in the 11th. In my opinion Conway is strategically using Trump's emotional perception of reality in her arguments, as she continues to creatively recontextualize literally everything that is critical of her employer.

In spite the messages that Kellyanne Conway conveys and thus contributes to the hostile public discourse, one must attest her certain charm, even gracefulness. Her Pisces Ascendant is ruled by Neptune, which itself aspects Venus and Moon - those are the typical astrological signs of skillful social pose as well as of a tender physical frame. Her appearance is in contrast with the content  and manner of her public talking and that might probably enforce irritation about her, as far as one part of the divided American audience is concerned. But this combination of fragility and aggressiveness obviously makes her appealing to the other part of the audience.

Interestingly enough, this resourceful and stubborn Mercury - Jupiter opposition is also found in the horoscope of Barack Obama. But the mental expansion and the tendency to exaggerate is in his horoscope brought under control by critical,  matter-of-fact Saturn that tempers (2) the opposition. In contrast to Conway’s horoscope, Obama's Sun is not part of that constellation, which means that he will not take disagreements and opposition he may encounter as an attack against his whole personality. His Leo Sun and Gemini Moon mitigate once more the mental obstinacy of Jupiter - Mercury opposition. Although the Sun in Leo is usually related to strong ego and self-involvement, Obama's ego is rendered more sensitive and compassionate though its square with Neptune. With his (self)critical and insightful Mars in Virgo which trines the Saturn, it is highly improbable that he would ever display verbal aggressiveness, no matter how attacked or cornered he may feel in a situation. Further interesting detail is, that same as Trump, Obama's horoscope shows Mercury-Neptune square. But the reason why we do not hear him talking (and probably thinking) about himself as being victimized, is suggested by different Saturn constellations. If he has ever felt inadequate or unlovable, that is not going to take an acute and center of stage dynamic in his life.

Interesting, what insights we can gain from astrological analysis, isn't' it?