In the frame of the Hollywood Me-Too movement in 2017  (see Tarana Burke for the actual "Me Too") Ronan Farrow did a journalistic research on the allegations against Hollywood mogul Harvey Weinstein. In the course of his work, Farrow stumbled upon a network of power, money and media that tried to intimidate the victims, witnesses and himself. His employer NBC News was part of this system, which ultimately led him to publish his revelations in the New Yorker magazine, what brought him the Pulitzer Prize in April 2018.

In his book "Catch & Kill" that was published last October, Farrow describes events that would sound like a thriller or a conspiracy theory, hadn’t he meticulously documented, examined and proven them. His book exposes not only the sexist power structures in Hollywood, but question also the credibility of established reporting in America. Ronan Farrow portrays a world of the powerful and the rich who use corrupt instruments, such as spies, propaganda and intimidation, to railroad their agendas.

The involvement of Hollywood celebrity in the Me-Too movement has provided Farrow with a platform and visibility that wouldn’t have been so big otherwise. In his media appearances, he consistently tries to shift the focus from his person to the protagonists and topics of his reporting. The New Yorker magazine is currently publishing parts of his book that draw attention to surveillance companies, such as the "Black Cube" company in the Weinstein case. 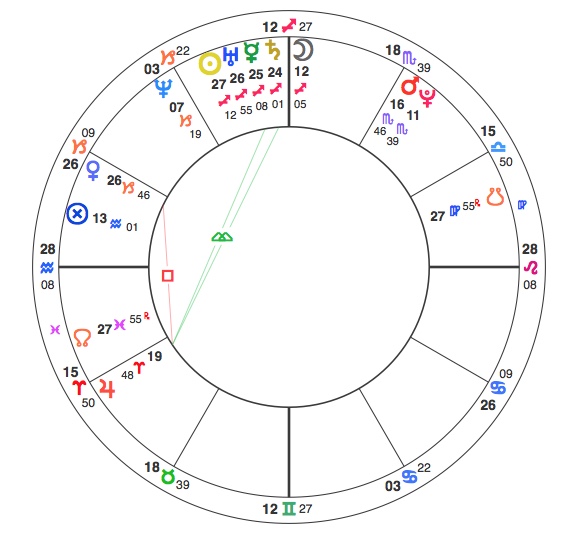 What immediately stands out in Ronan Farrow's horoscope is the Sagittarius Stellium with the Moon and the Sun. This Sun-Moon combination indicates a person with strong convictions who is committed to things he believes to be right. Since Jupiter is in the Aries in the 2nd house and rules the Sun and the Moon, these beliefs are based on very personal values ​​that were most likely acquired in the early home, especially by the mother (the Moon in conjunction with the MC, Jupiter rules the MC and makes a trine to the Moon).

It is known that his mother, Mia Farrow, adopted ten children in addition to her four biological children. Unlike most other celebrities, she also adopted children with disabilities. She has also become a special ambassador for UNICEF. It can be concluded that Ronan Farrow actually received social awareness and values ​​from his mother.

Aries Jupiter in his horoscope forms trines to the Sagittarius Stellium and is itself ruled by Mars in Scorpio, the ruler of the 9th house. The emphasis upon 9th House and the Sagittarius indicates that social ethics and politics will determine Ronan Farrow's career path, as well as journalism as a means of defending his social and political concerns.

We know that Ronan Farrow studied law and political science and worked in the US State Department under Hillary Clinton prior to his career as a journalist. His first book was published under the title "War on Peace: The End of Diplomacy and the Decline of American Influence".

The horoscope ruler Saturn is in Sagittarius together with Mercury, Uranus and the Sun. The whole constellation points to an intellectual, serious person, with strong will and the ability for in depth analysis and understanding. A sober dose of suspicion is also indicated, which enables him to see through most people. The half-sum Jupiter-Neptune = Ascendant adds an idealism to this combination. Since Jupiter rules the 10th house, the profession is a channel for idealism. Interestingly, Saturn also dominates the 12th house in the zenith: the world of secrets or the underground, things that are hidden and even his own enemies help him to gain social prestige.

Uranus in conjunction with Saturn suggests that he will take a drastically different path than his parents and will break with family traditions in some way. Although Farrow has also chosen to work in the media and be highly exposed, the essence of his work is essentially far removed from the entertainment industry where his parents made names for themselves.

The Sagittarius emphasis in his horoscope may indicate an urge for adventure, but the prominent Saturn and Scorpio Mars indicate that Ronan Farrow does not voluntarily sacrifice security. Adventure is not the motivation for what he does, but he can accept it when it comes to his primary goals. The Saturn-Neptune midpoint on the Aries Point shows the ability and willingness to make sacrifices if necessary.

The whole horoscope reflects the personal integrity and ethical unwavering that Ronan Farrow shows through his research and in interviews that he gives or conducts.