In October 2015 I posted on my website a text about the Jupiter-Saturn cycle and the European crisis. It was the so called “refuge crisis” and my reading of French astrologer Andre Barbault (1) who conducted an extensive research on synodic cycles and history since the 60s, that moved me to look at the astrological picture behind the events.

Saturn Jupiter conjunction in Taurus in 2000 and replacement of national currencies with euro in 2002 marked a new phase in the European Union.  Developments since than seem to correlate with this planetary cycle. The periods of waxing sextiles and trines after the conjunction proved to match the periods of EU expansion and the welcoming the new member states. An opposition in a synodic cycle is seen as a culmination of the expansive part of the cycle. The same soft aspects between Jupiter and Saturn that followed the opposition did not correlate with further growth or enlargement of the EU. 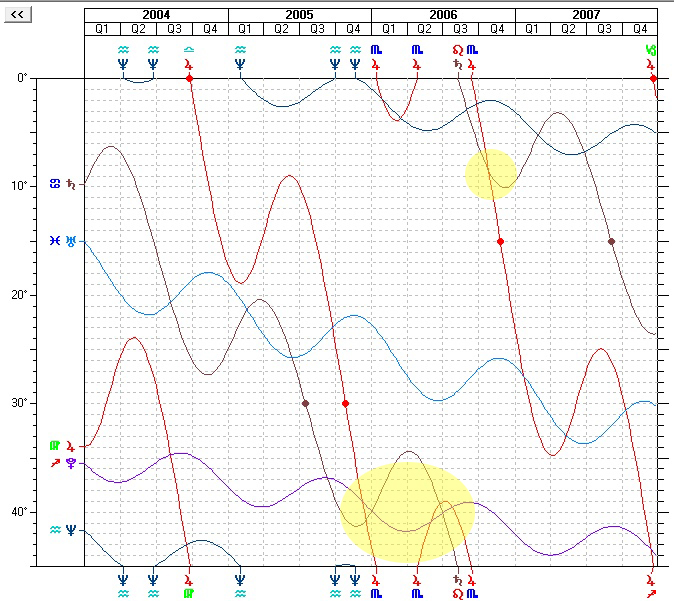 Waxing Square and the opposition

The squares and the opposition of the Jupiter-Saturn cycle clearly marked the periods of crisis. The growing Jupiter-Saturn square in 2005 can be seen as a growth crisis (see text form 2015). The Jupiter-Saturn opposition in 2010 correlated with the crisis, the culmination of development and the beginning of the period of decline. The developments in this period ended with the Brexit which marks a new cycle for the European Union,  while Saturn and Jupiter are reaching their conjunction in Aquarius in 2020.

Note: In 2015 I wrote “Pluto, the planet of transformation that symbolizes debt and financial world among other things, enters Capricorn in 2008 and squares the Jupiter-Saturn opposition by the end of 2009. This defines the focus of the EU crises that is expressed through the opposition – the sovereign debt crisis in Greece.” What I actually had in mind was the year 2010, when Pluto did square the Jupiter-Saturn opposition. 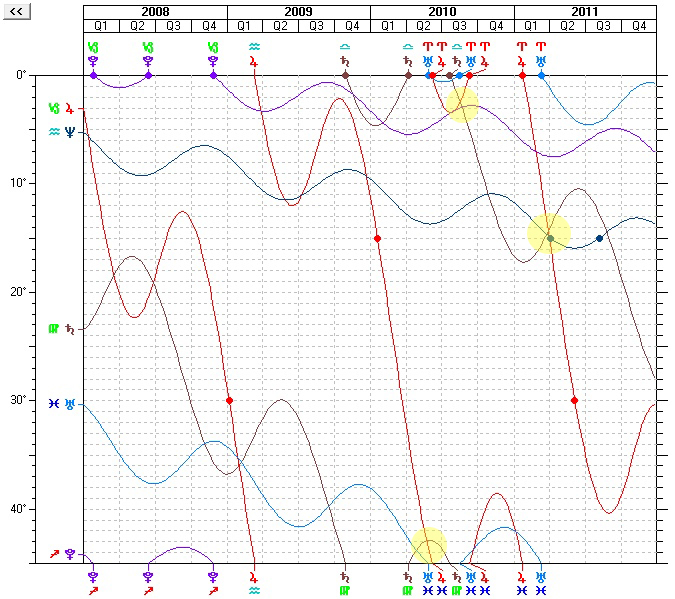 At the time of that writing I was focused on the migration from Middle East and I interpreted the closing square of Jupiter and Saturn in those terms. The cycle of two shakers Uranus and Pluto and their square, which lasted from 2012 to 2015, I interpreted in the light of the Greek-Debt crises that culminated with the election of leftist Syriza party precisely at the time of the last Uranus - Pluto square in January 2015.  Looking at the transiting Jupiter that formed the opposition to Uranus and square to Pluto from November 2016 to September 2017 I concluded :

“Because Jupiter will cross the Uranus-Pluto square from December 2016 until August 2017 and will create the same, although less critical, astrological picture as in 2013-14, there is also a possibility that Greece or another EU country with debt comes into focus and replaces the refugee theme.“

Looking back, those were the developments in the UK that came into the focus to replace the refugee theme. The waning square in any synodic cycle presents tensions within the periods of decline and so the preparations for Brexit referendum correlated with Jupiter-Saturn waning square. This phase of the cycle initiated what will be the biggest formal change for the European Union. The exact Jupiter-Saturn square took place in August 2015, March and May 2016. The Brexit referendum was held in June 2016. 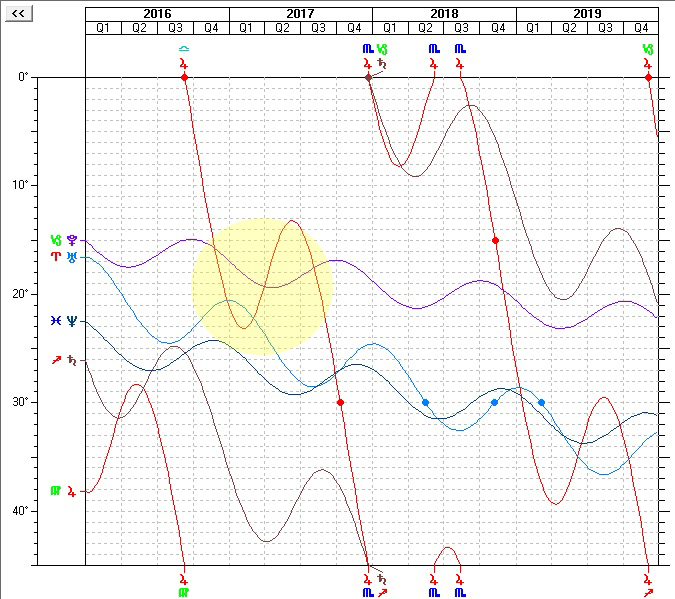 My text from 2015 says: “The EU crises that increases since 2010 introduces a new phase that will not take another turn before 2020, when Jupiter and Saturn conjoin in Aquarius and start a new cycle. Important reforms will not happen before 2021.“

We now know that the Brexit marks the beginning of a new phase, which corresponds to a new EU cycle and the Jupiter-Saturn conjunction in Aquarius in December 2020. Brexit came into effect on January 31. 2020 when also a transition period began that will last until the end of 2020, in which various legal provisions are to be specified and formulated.

My next assumption on reforms that will not happen before 2021 were based on the Saturn-Uranus cycle. These two planets correspond to the relationship between capital and work, their conjunctions throughout history corresponded with new cycles of autocratic, right or conservative tendencies.

This Saturn – Uranus cycle started with the conjunction in 1988,  just before the fall of Berlin Wall and reached the opposition in 2008-2010. The period of opposition corresponded with the global economic crisis and Greek sovereign debt crisis that shook the European Union and  brought forward particular economic and political measurements. The groundwork for these policies was laid years before, at the time of the conjunction. The upcoming closing Saturn-Uranus square in 2021 will mark the further implementation of the existing conservative policies and austerity strategies.

The beginning of the new Jupiter-Saturn cycle is preceded by the Saturn - Pluto conjunction in 2020.  Since Saturn and Pluto have a bad reputation I will  take a closer look at the conjunction. The Saturn-Pluto conjunction in 1914 corresponded to the First World War, but their next conjunction took place after the World War II in 1947. What was the difference?

We interpret all synodic cycles in relation to the longer synodic cycles of the slower planets. The Saturn – Pluto conjunction in 1914 came after series of Uranus-Neptune oppositions between 1906 and 1910. That opposition was a culmination of the cycle that marked the height of the imperialism whose groundwork was laid  by the industrial revolution which correlated with the Uranus-Neptune conjunction in Capricorn in 1821. Andre Barbault links this conjunction to our modern global capitalism (2). The Uranus – Neptune conjunction in Capricorn correlates with the first steam locomotive railway lines , with first steamship across the ocean and other technological inventions that spurred new global and socio-economic developments . It would be important to note that we cannot find one clear-cut date for such developments that are actually a result of accumulation and overlapping of historical processes. As historians have established anyway, those imperialistic developments had led to the outbreak of the First World War. 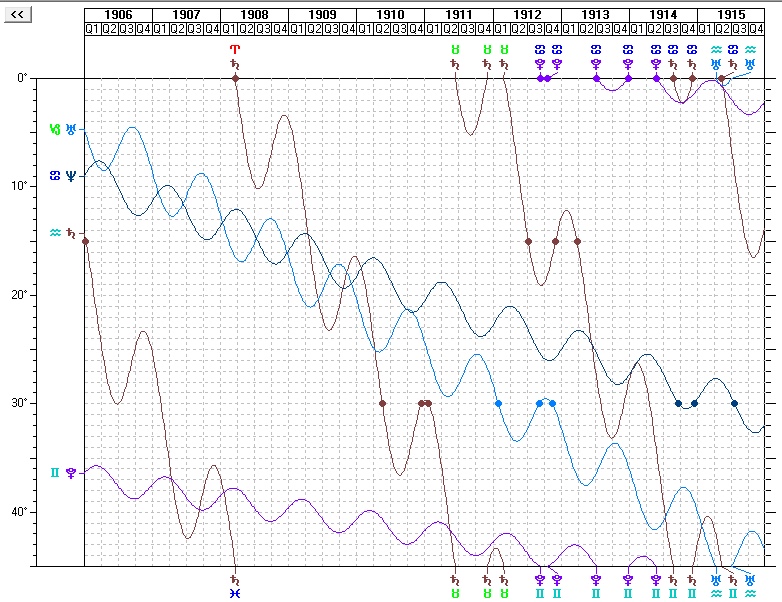 The Saturn-Pluto conjunction in 1947 was preceded by the waning sesqui-square between Uranus and Neptune (1931 - 1935) which corresponded to the world economic crisis. At the same time, Saturn and Uranus (conservative and right-wing tendencies) formed the waning square accompanied by the opposition between Saturn and Pluto. In 1936, Saturn and Neptune formed an opposition. The cycles of these two planets correspond to left, communist or populist tendencies. (3) All of this contributed to the crisis and laid the foundation for the Second World War that broke out just before the waning Saturn-Pluto square in 1940. 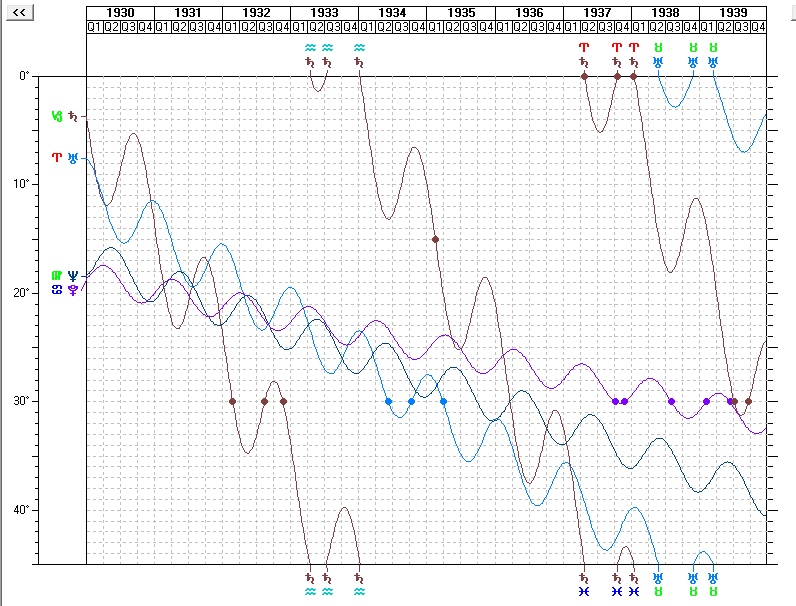 The Saturn-Pluto in 1947 conjunction did not bring another escalation in Europe, but it has initiated a new period for many countries in Asia, like China, and for former colonies.  The reader is referred to read Barbault on the subject. The next synodic Saturn-Pluto cycle started with their conjunction in 1982 and it ends with the upcoming conjunction in 2020. The opposition of Saturn and Pluto in 2001 marked  the climax of expansive developments in the cycle and corresponded with the 9/11 terrorist attacks and the so called War on Terror. On the other hand, in that same time China became a member the of WTO, which confirms Barbault’s demonstrations, that Saturn-Pluto cycle is closely related to the historical cycles of China and the Far East.

The Saturn-Pluto conjunction in 2020 happens within the context of the new Uranus-Neptune synodic cycle which started in 1993. This time the cycle corresponds with the rise of our modern globalism and with the new social-economic developments that followed  the rise of  internet and other new technologies. While we are still in the evolving part of the cycle and far away from reaching the climax point of globalization, the waxing Uranus-Neptune semi-square in 2017-2019 corresponded with tensions. We can look at US protectionists policies under Trump as an expression of these tensions.  This semi-square continues to evolve towards a waxing square, and this time it is not accompanied with simultaneous accumulation of other challenging planetary measurements.

That leads me to conclude that the simultaneous occurrence of the Pluto-Saturn conjunction and Jupiter-Saturn conjunction may suggest laying the groundwork for the new relationships between China and EU, possibly also India and EU. They could also be related to the new phase and new strategies in the war of terror.

The actual developments remain to be seen so I will review this article in several years in order to reexamine the manifestations and their correlations with the planetary cycles. 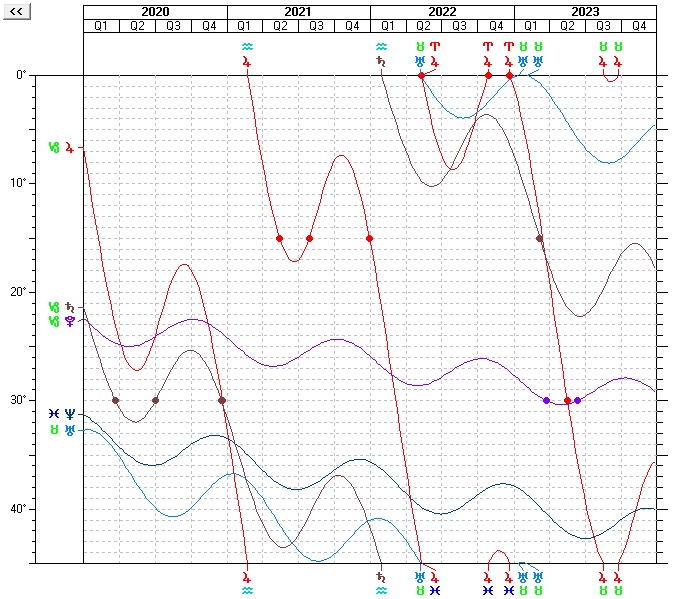