As all other planets in astrology, Saturn can be approached from different points of view in different contexts. Related to parent-child relationship, the most important symbolical feature of Saturn is that it represents practical learning and cumulative experience.

Saturn and the learning process

This process of learning in the early environment is marked by conscious and unconscious expectations that parents put upon children, by setting certain boundaries and  controls - all  a symbolic domain of Saturn. “Controls” and "boundaries" have some negative implications, such as suppression. But, while they do indicate restrain, controls can also be necessary and constructive: from “don't put fingers in the electric socket” and protecting children from physically dangerous situations, to the discipline and self-regulation necessary for different kind of activities: sports, school studies, social situations etc.  Besides controls, Saturn also implicates limiting facts of life. Once when we are aware of limitations, we can initiate constructive and creative processes towards any situation or goal. One comparison: architectural statics, the effect and distribution of forces in the physical world, present the limitations and rules of the factual world, that we need to know in order to build a stable building. That is the essence of learning for life, symbolized by Saturn: it implies learning from limitations, the self-regulation and knowing own boundaries, which support constructive dealing with life, self-protection included.

In this regard, what we learn through experience in our early environment can provide us either with the constructive patterns of behaviour for dealing with the world, or can impose different kind of suppressions and render extreme self-protective patterns (see egoisms in the article about Berlusconi), or it can be a combination of both.

Saturn connections in the natal horoscope

When comparing Saturn in the horoscopes of parents and their children, we can derive insights about parental influences and learning process of the child. We always have to consider Saturn's relation to other elements in the horoscope. Saturn stays in one sign for about 2 years so that any generalizations based only upon the sign that Saturn occupies are misleading.

What follows is an illustration of the Saturn correlations in three horoscopes of a family. In the natal chart of one mother, Saturn in Aquarius occupies the same sign as the Sun and makes a conjunction with the Midheaven. Saturn rules the 7th house of relationships and makes a quindecile  aspect (165°) to Uranus in the 4th house, that is alos the ruler of the Midheaven. Saturn makes a square to Neptune, the co-ruler of the 10th House.

This astrological picture suggests an extremely strong focus on relationships. The relationship needs are here related to how this woman seeks to find and affirm her place in the society i.e. to establish her social stand. Those needs, that motivate her behaviour, are established in this mother's early environment. In other words, they are influenced and formed somehow by her parents: by their example, by their expectations, by limits or by controls that she has experienced in her formative years. 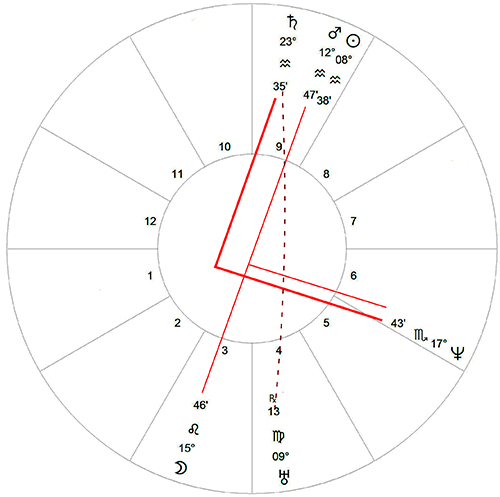 Natal chart of the mother

So how will she "digest" what she has learned about life and herself? With Saturn in Aquarius in the 9th house, she will tend to intellectualize, analyse and abstract her experience within relationships in generalized subjective truths about life. Under the influence of Neptune, this understanding is going to be idealistic. Saturn's strong relation to Uranus (quindecile) and  to the10th house suggests that idealization is part of a pattern that protects her sense of individuality - it is a “helping-hand” in her attempt to develop her personality, to reach independence and establish position within her social group and society.

Nevertheless, this configurations suggest also a rough road towards the fulfilment - disappointment, even some kind of martyrdom, is tied to relationships. Because experience will be so neatly rationalized, learning by experience might stay in the realm of theory and justification. When we include other constellations in her chart, such as the Moon, the ruler of the Ascendant, square to Neptune, we see another focus upon seeking security and developing the Self within idealization concepts,  as well as a tendency towards escapism and blind spots -  all of that focused on relationships. In other words, there is a high possibility that her personal issues will resist to be resolved. The reality of her life are several unsatisfactory partnerships, as she continuous to look for the “the right one”,  while repeating the same patterns of choice and behaviour. So how will this mother pass her experiences to her children or how will her experiences influence them? There are no rules about this, only individual chart of the children can give the clue.

Mother's Saturn falls in her son's 12th house and makes a sextile aspect to his Saturn in Sagittarius in the 9th house. Saturn in the son's chart makes no challenging aspects with other planets. While mother's life experiences and especially her challenges with intimate relationships, might provoke some anxiety in her son (12th house), he will tend to filter his experiences, including what he directly and indirectly learns from mother, through a philosophic rationalization. Because mother 's Saturn is sextile the son's,  her personal issues will not clash with his learning about the world and how to fit in, nor will his self-protective patterns take any extreme form. When a Sagittarius Saturn in the 9th house is challenged by other aspects, the unbalanced self-protective pattern will very probably take the form of extremely dogmatic and biased world view. But that is not the case here. 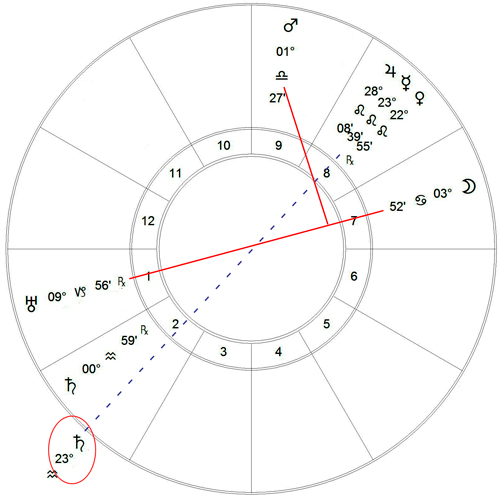 Mother's Saturn in her daughter's horoscope

The horoscope of the daughter suggests another picture: her Saturn is in the 2nd house, it rules the 2nd, and is in the same sign as Saturn of the mother. The 2nd house Saturn is quiet often accompanied by self-worth issues and we see here the connection with the mother's Saturn, which makes opposition to 3 planets in daughter's 8th house: to retrograde Venus, Mercury and Jupiter in Leo. Experiences and behaviour of the mother will challenge how the daughter feels about herself (the 2nd) and how she deals with intimacy in relationships (the 8th).

Daughter's horoscope also shows the Moon in the 7th house that makes a T-Square with Uranus in the 1st and Mars in the 9th. Mars rules the 4th hose of early home and emotional security.  This astrological picture suggests that in daughter's experience, her early home was insecure, probably inciting in her a strong need to fight for her place at early home. Mother is involved also in this picture through the Moon symbolism. This experience of emotional insecurity in a place that was supposed to provide safety and protection, will influence her partnerships. The pattern of needing to fight for security or the push to defend herself to attain security, will dominate her relationships.

Saturn in 2nd House can develop excessive material focus or an excessive focus on social status, as a self-protective pattern, in order to compensate for self-worth issues. Daughter's Saturn is not challenged by other aspects and it makes a trine to Mars, that leads the challenging T-square constellation. She will likely be able to learn form her experience.

These astrological comparisons demonstrate that, although a parent may have his or he own unresolved issues and may live a life of chronic challenges, it is not necessarily the case, that a child will inherit a problem from the parent. Analysing the position of Saturn across family charts gives clear insights about learning process that motivates certain patterns of behaviour and about functions that these patterns have in an individual psychological makeup.