The Acid Queen and Rock 'n Roll Lady  Tina Turner turned 75 this year. Unusual raspy voice, vocal  range and electric stage performance have been the hallmark of her musical career  for over 50 years. Back in  90s she published her biography where she courageously and frankly reveals the "behind the scene" in her life. Abandoned by parents at a young age, she rose to fame in 60s,  working with her business and intimate partner at the time,  Ike Turner.
Not less interesting than this fascinating personality and life path is the astrology behind it.

Vitality, energy and enthusiasm, suggested by Sagittarius  Sun, are supported by intelligent and social, "be in charge"  Gemini Moon in the 10th house. This is a very resourceful Sun-Moon combination, where adaptability and versatility become  survival tools.  With Mars in Pisces, that forms a T-Square with the Sun-Moon blend, she needs the support of constructive believes, inspiration, phantasy  or some kind of disguise in order to take action and develop the potentials suggested in this horoscope.

Because of accentuated mutable signs,  the ability for self-affirmation, which we find in the fiery Sagittarius Sun,  will wait for the right impulse from the environment to react and grasp the possibility to express. With the naturally curious and pragmatic Gemini Moon we can be almost certain,  that she will be able to take a chance when it comes. 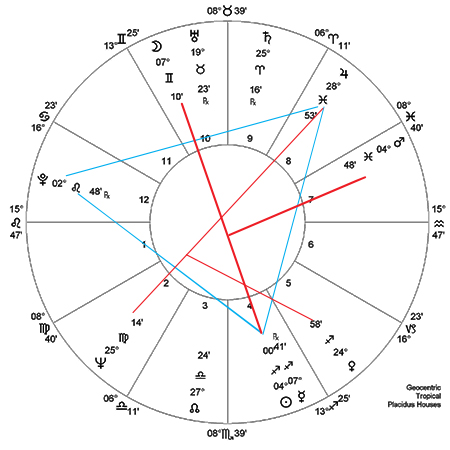 We see also the grand trine that includes the Sagittarius Sun,  Pluto and Jupiter, which corroborates strong abilities for self-presentation, and also connotes the fear of being ignored, a reaction to the experiences  from her formative years. The Grand Trine involves the 4th, the 12th and the 8th house, and through the rulership network relates to the Leo Ascendant and the 5th house. This makes her emotional security, sense of belonging, past experiences and the hope to be valued by others,  interdependent. Her  personality and the expression of her Self, play an important role  for fulfilling these needs.

The Venus is another accentuated point here. It rules MC in the 5th house, and is a finger of a T-Square . This T -square with Jupiter and Neptune involves  2nd, 8th and 3rd  house by occupation and rulership.  The picture suggests strongly show business and the "make believe" within a profession.  On the other hand,  this constellation suggests the developmental challenge to overcome the confusion about own identity, and to find out who she is. The ultra romantic and idealistic expectations are part of this astrological picture,  and are the offset for a poor self-worth and self-esteem. This idealism is needed, it is  motivational.

Above the Horizon, the Uranus squares the Asc from the 10th house and suggests a strong need for changing own circumstances and building an identity that differs from the "abandoned child" of her  childhood. The Uranus urges her to brake free  through profession and  looks for yet another channel. It  rules the 7th  house and makes a quindecile to the Sun. This implies one mostly subconscious focus on relationships - intimate and other kinds. In Tina's life this was acted out in a partnership that was in the same time professional and intimate.

In 1958 and 1959 the Uranus was transiting  her Midheaven and Ascendant, what indicates possibilities for development and for gaining freedom from indicated circumstances and according to the age.  Those were the years when her music potential was discovered by Ike Turner, former talent scout, and she started to sing for his Kings of Rhythm. Her Pisces Mars got the outlet for imagination on the stage and the self-affirmative, performative energies of the Sun- Moon blend could begin to  express fully and to develop.  That time was the beginning of a relationships that will  shape Tina Turner  as a performer and initiate her musical career, that was  liberating in several ways.  The "make believe" of the stage performance has certainly helped her to discover new parts and new  strengths within herself.

In private life, this combination of ultra romantic enthusiasm , the need for self-confirmation  and the need for a role model in this regard, joined with the vulnerable self-worth and  not developed personal boundaries, all suggested in this horoscope,  will lock Tina Turner in an abusive intimate relationship for years.

Next time when Uranus made his "call for freedom" while transiting the Midheaven and the Ascendant  in 1976 and 1977, Tina left Ike, taking their four children with her.  Out of 14 years of business and marriage,  she claimed only her stage name - her capital for the future. Astrologically, we have here  the corroboration of the constellations mentioned before in this article.

Tina Turner says that Buddhism gave her the strength to make the final step and leave - Mars in Pisces needs a belief and inspiration to pull oneself together.  Stage name as an investment for profession is the part of the Venus T-Square networking within the chart. Courage and the vision of future are again suggested by the Sun-Moon blend invigorated by Mars.