After reading about childhood experiences of Jane Fonda I was intrigued to look at horoscopes of her family members. I will follow here the configurations that vividly show how parental unresolved issues impact their children.

Astro-Databank supplies for AA rated birth time of Peter and Jane Fonda. There is no birth time information for Henry Fonda and Frances Ford Seymour , so I do not consider Moon, Ascendant and Midheaven in their charts. 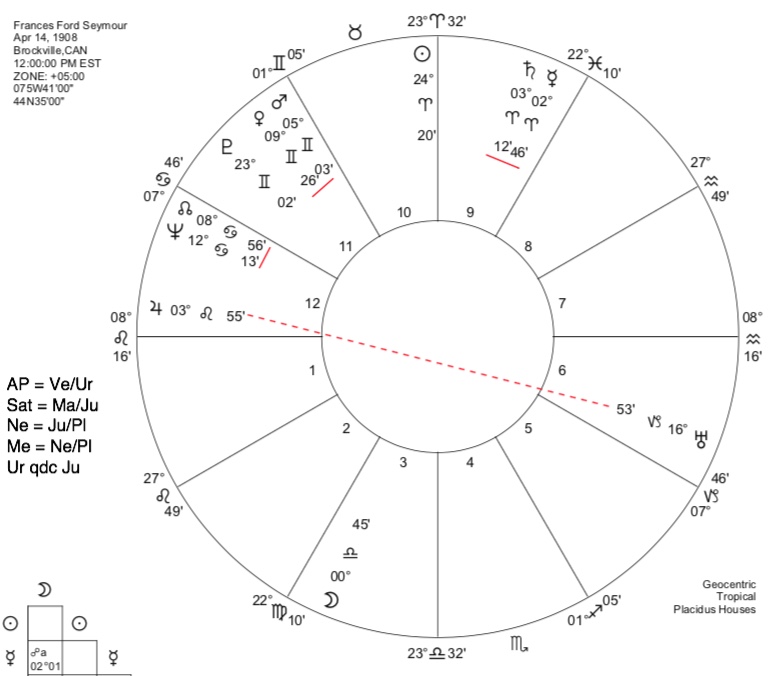 Mars and Venus conjunction in Gemini suggests cerebral focus on relationships, need to be appreciated for communication skills and versatile intelligence..

AriesPoint=Venus/Uranus suggests intensified need for affiliation and love, that seeks endorsement for personal grace and worth in public.

With Mars sextile both Jupiter in Leo and Saturn in Aries, having Sun in Aries, we can anticipate that it was easy for her to satisfy this need for ego-recognition on social level..

Mars in Gemini could alert to anxious mindset. In the same time, Saturn in Aries conjunction Mercury emphasizes parental controls, or suppression, and lack of recognition in early home that imprints in the mindset and could indicate depression.

Neptune=Jupiter/Pluto - some kind of suppression, defensive act of imagination or sacrifice related to her resourcefulness and personal power. Neptune configured with the Node alerts to mother's influence.

Mercury=Neptune/Pluto midpoint repeats indication of the defenses or escapist behavior, some kind of suppression within communication, "communication is other than it appears" and, "nervous irritability" as well.

Uranus quindecile Jupiter holds a sense of " forcing one's luck" , sense of obsession within strong focus to foster optimism, confidence and to brake out of suppressing patterns that obstruct fulfillment of her needs.

Sun=Jupiter/Uranus emphasizes once more this quindecile and suggests her seeking to find recognition and affirmation within what F. F. Seymour envisioned as " luck and success" , that was certainly colored by her early traumas as well with gender roles and social imperatives of her time and place..

With this in mind, we look the synastry between mother and daughter, Jane Fonda: 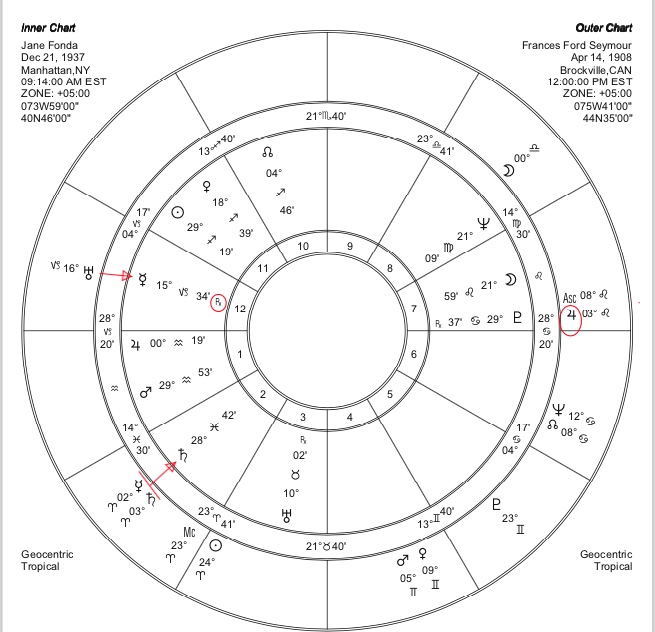 Mother´s Jupiter-Uranus quindecile (with Sun at the midpoint) falls on Jane´s DC & Pluto on one side, and on Mercury retrograde in 12th house on the other side. Her Sun squares Jane´s Pluto - Jupiter opposition. Pluto is the ruler of her 10th, Jupiter in Aquarius on Ascendant rules her 11th.

Mother´s occupation with herself (Aries emphasis manifestation within the context of trouble) is dynamically related to Jane´s seeking the response and appreciation within social filed, outside of the family, finding her ways to be socially significant (engaging in humanitarian/social causes) and establishing perspectives for herself in public projection (through acting, activism). This will compensate for lovability and self-worth concerns.

Pluto quindecile Mercury in Jane´s chart suggests feeling misunderstood and difficulty with communicating innermost thoughts and needs. This is related to her ability to find fulfillment in personal relationships (Pluto is in 7th, mercury rules 8th and 5th), and with learning to acknowledge and communicate her needs privately.

The shadow of mother´s unresolved issues, her inclination to depression, her self-centered way of seeing the things (which was certainly a defense pattern, even though inefficient), was felt by young Jane strongly : Saturn and Mercury conjunction of the mother is configured with Jane´s Sun square Saturn that pictures Jane´s relationship with father, particularly what was lacking in the relationship. Jane Fonda wrote in her autobiography that she, little girl in the midst of disturbed family life, blamed her mother for her parent's divorce.