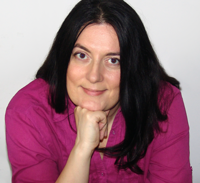 She is a highest honors graduate of Noel Tyl´s demanding Master´s Degree Program* for professional astrologers. Since 2009 she has been offering professional astrological consultations and helping her clients to develop solutions and get answers and new perspectives on many questions in life. Psychological astrology that she practices leans on the motivational-psychological understanding of personality. This approach is oriented towards self-knowledge and solutions in the same time, and you'll find out that it's very efficient.

Tanja firmly believes that dynamic connection between the personality and its environment defines the places of self-determination and  that astrological world view supports our awareness and implementation of free will.

Astrologer Tanja Ristovski in an interview with Verena Arnold (prontopro.com) from ProntoPro. Thanks for the publication! (2018)

Tanja, when did astrology come into your life? How did you come up with your own method of interpretation and how do you define the goal of your counseling? What do you love about the consultations?

Astrology came into my life some thirty years ago. Through my artistic training I became aware of how people interpret what they see differently. When we, art students of sculpture, made the portrait of a model, all portraits became very different and yet they were all faithful to the model. That piqued my curiosity about how people differ from one another. I wanted to know why people's perception can be different and how different interpretations of what they see come about. I was increasingly interested in the individual motivations behind the seemingly same or similar behavior. Psychology provided an explanatory model that I felt was a bit narrow. Only in connection with astrology, as I later discovered it with my teacher Noel Tyl, did the image of man become complete for me.

My goal in counseling is to help clients to better understand themselves and the context of their life, which means that they can use their personal strengths more consciously and more fully use their potential. The exciting thing for me is that after every astrological consultation I gain a better understanding of life and people. And with each client I expand my astrological knowledge.

Many people do not dare to take astrological advice. Is that the case because they are afraid that something negative will be written in the stars? How do you counter this fear? Why do you think some people resist astrology?

I actually know people who have this fear and would therefore never go for astrological advice. Such negative expectations have their reasons. However, the reason lies in an individual psychological background and not in astrology. Therefore, no argument can influence this attitude, and neither do I try.

There are also people who oppose astrology because they think it is nonsense. If someone with this attitude speaks to me about astrology anyway, I only discuss and argue if he or she shows curiosity. People today tend to have a distorted idea of ​​what astrology is because of various shady practices being falsely offered under the name of "astrology". But I don't waste my time with people whose only intention is to dogmatically maintain their own point of view or to enter into discussions out of sheer lust for argument. These people believe they are defending the ideas of the Age of Enlightenment, but they lack the awareness that the dominant positivistic and empirical traditions of thought, which are limited to empirically verifiable phenomena, have no absolute claim to knowledge.

Does astrology serve as an instrument of prognosis? Can astrology also predict concrete events? Do planetary constellations have any influence on world events? Can astrologers even foresee the fate of countries and rulers?

Astrology can also be used as a tool for forecasting. But the astrological forecast has nothing to do with a crystal ball or clairvoyance. Astrology is one of many explanatory models. It is based on the hypothesis that our human world can be explained mathematically and that different phenomena are related. The simplest example of such a connection is the earth's orbit around the sun, which people on earth experience as seasons and which influences their activities.

The art of forecasting lies on the one hand in observing the movement of planets and stars. This movement is constant and can be calculated and predicted. On the other hand, the art of prognosis lies in the observation of human life itself. This consists of occurrences and phenomena that are not constant and are subject to many changes and influences. Therefore astrology cannot give a “crystal ball” forecast, but we can compare it with weather forecasts or economic forecasts.

How can the layperson distinguish serious astrology from dubious "funfair astrology" and a good from a bad astrologer? How do you know if an astrologer is well trained and capable? And why do you think so many people fall into the hands of this shady astrology?

To make a natal horoscope you need the date, place and time of birth. A serious astrologer will always want to check the specified time of birth and analyze the calculated horoscope, which takes a certain amount of time.  You can also tell whether an astrologer is well trained by what he or she means by checking the time of birth. It is done using astrological techniques, it does not mean that the client gets the information at the registry office.

The question of whether an astrologer is capable, I think, is up to the individual judgment of the client. As you yourself say, there are also people who are satisfied with "fairground astrology". Otherwise they would not make use of it. They probably like simple answers that don't require rethinking, or working on themselves or their own circumstances.

I recently had a client who previously attended a new moon lecture by an astrologer. Afterwards, those present were offered a 'mini astrological reading'. The astrologer told this lady that the next year will be difficult for her. What exactly "a difficult year" means was left to her. This lady came to me with fears and negative expectations. It was her own experiences and personality profile that play a major role in what she thinks of as "difficult". Besides that, if something can be qualified as  "difficult", then astrology can identify the areas of life to which the difficulty relates. In a serious astrological consultation, the strategies and possibilities for overcoming the possible difficulties are also discussed and sought. This is an example of why I think fairground astrology is irresponsible, and why a consultation can't take five minutes. Apart from the fact that it needs time beforehand for a precise analysis of the natal horoscope.

*Noel Tyl  integrated psychological need theory into astrological analysis in the 1970's, which put astrology securely in pace with the most sophisticated disciplines of humanistic studies. Tyl was a co-founder of AFAN, and  is recipient of Regulus Reward.

*Deborah Houlding one of the world’s foremost astrologers,  she is researcher, author, publisher , founder of STA and is recipient of Regulus Reward.