In 2014 I wrote about the crisis in Ukraine through the lens of Pluto - Uranus square and their transits of the horoscope of Ukraine, which is set for the proclamation of independence on August 24, 1991. The time given in Campion's "Book of National Horoscopes" is approximate and set at 17:31 BGT (-3). Ukrainian astrologer Vitali Berdnik gives a time of 17:57, and I find this time to resonate with events.

The interaction of the planets Pluto and Uranus is a combination associated with social unrest and division. This was reflected in the demonstrations against corruption and government in Ukraine at the end of 2013 and in the polarization of the country, which reached its peak in February 2014 when Crimea was annexed by Russia and two regions proclaimed their sovereignty and independence from Ukraine.

My conclusion at the time was that the crisis in Ukraine will not settle down, and I ended the article with this sentence: "This is a picture of continuation of political unrest."  You can read the whole article "Ukraine and the Uranus-Pluto square" at this link.

What is natal chart of Ukraine telling?

After eight years of simmering internal conflict between so-called "rebellious" regions in Ukraine and the government in Kiev, the situation escalated again in November 2021 and Ukraine remains in the crossfire of geopolitical interests between Russia and NATO allies. 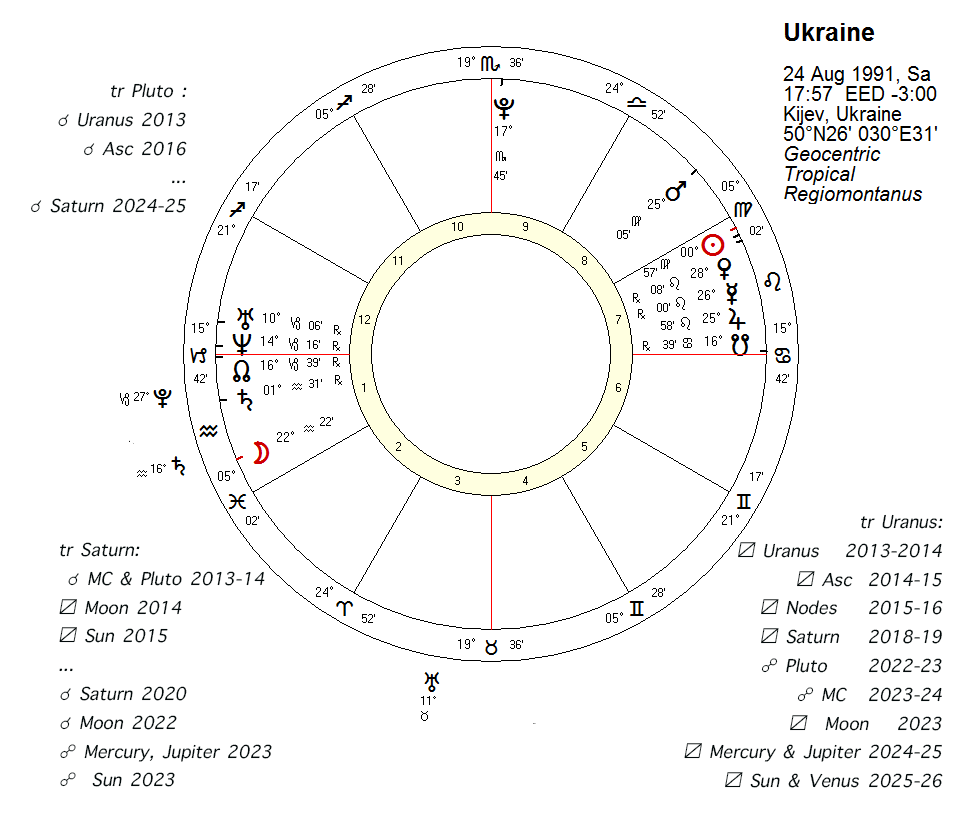 The horoscope of the Proclamation of Ukraine is very revealing in this respect. The ruler of the state is retrograde Saturn in the first house. The retrogradation weakens the otherwise strong Saturn in Aquarius, and the first degree in a sign is indicative of a new development: Ukraine was never independent, unlike other former Soviet provinces that returned to independence with the breakup of the Soviet Union. Retrogradation also means a kind of unfinished work, which can bring "backward" tendencies and changes.

The open issues and foreign infuences

Neptune sits tightly on the Ascendant, underlining the sense of vagueness or unanswered questions in the young state. This angular Neptune is conjunct Uranus in the 12th house, reflecting an image of instability that is further emphasized by the cardinal sign Capricorn. Pluto hovers over the MC and, together with Neptune on the Ascendant, indicates the acute need for clarification regarding existential issues and the integrity of the country. At the same time, Pluto is square to the axis of the South and North Nodes, which extends across the horizon, and also squares the Moon in the first House. This is a signature that promises crises related to international and foreign affairs.

What this occupied 7th house certainly means is that foreign countries are heavily involved in domestic affairs and set the terms in various areas. Mercury rules the 5th house of diplomacy, the 6th house of the military, and the 8th house of financial dependence or foreign financial aid. Venus rules the 4th and 9th houses, political opposition and legislation. Jupiter rules the 2nd house and the monetary and other assets of the country. At the same time, Jupiter, through its rulership of the 11th and 12th houses, also rules the parliament or political support of the government, as well as secret conspiracies that undermine the country. All these areas are related to and defined by the foreign forces and politics.

The significator of the government is Mars, which is in the 8th house. This is an image of the government's dependence on foreign money. Mercury has rulership over foreign money, credit and debt, and it is in exact conjunction with Jupiter, the significator of Ukraine's gross national product and national wealth. Both Mercury and Jupiter are in the 7th house. This further emphasizes the picture of dependence.  Almost all planets in this chart are retrograde except Jupiter and Pluto.
This indicates how difficult it is for the young independent state to chart a straight course by its own efforts, and how likely the possibility of sudden changes is.

The internal divisive forces indicated in Ukraine's horoscope by the conjunction of Uranus with Neptune on the Ascendant and the conjunction of Pluto to the MC, as well as retrograde Saturn in the first degree of the sign, represent the unstable domestic political background in which international support and/or intervention takes place.

At least since the annexation of Crimea, USA has given over $2.5 billion in military aid to Ukraine, providing also “trainers, selected defensive systems and anti-tank missiles. This assistance has principally aimed to improve Ukrainian effectiveness in the relatively static conflict against Russian-backed separatist forces” in east of Ukraine. (1) On the other side, Russia is giving military support to the eastern regions. Actually, the whole crisis in Ukraine, from 2014 to today, is a playground for the unresolved geopolitical questions.  This is what Democracy Now  writes on this topic: “The crisis has grown to this point because of Russia’s deep unhappiness with the expansion of NATO to its borders and the threat of NATO admitting Ukraine, which Russia regards in much the same light that America regards the appearance of hostile military alliances in Central America.” (2)

Ukraine is thus at the mercy of conflict between two foreign adversaries, both of whom are weakening the country by pursuing first of all their own interests.

The civil war in Ukraine has been going on with more or less intensity since 2014. The transit image reflects the ongoing turmoil.
After transiting Uranus formed a square to the Ascendant and Neptune three times in 2014, we see a whole train of outer planets hitting the Ascendant and planets in the first or seventh house all through 2025. Transiting Pluto formed a conjunction with Neptune, the Ascendant, and the North Node three times in 2016 and will reach a conjunction with Saturn, the significator of the state and its people, in 2024. Transiting Uranus was in square to the same Saturn in 2018, with the last contact occurring in April 2019.

Uranus and Pluto transits up to 2025

As I write this, the conflict with Russia dominates the international press. While I cannot say whether or not Russia will invade Ukraine, what I can say with certainty is that there will be more turmoil and no peace for Ukraine until 2025, and we can expect change and instability in the years beyond 2025 as well.

Transiting Uranus approaches opposition to Pluto on the MC, forming the exact aspect in July 2022, after which Uranus will oppose Pluto two more times, in October 2022 and April 2023, while forming an opposition to the MC almost simultaneously. This astrological picture indicates opposition to the government and changes taking place within the government. After Uranus finishes its transit to the MC in May and December 2023, it forms a square to the Moon in the first house, the ruler of the 7th house. This brings into focus secessionist tendencies within the country and changes in foreign policy toward Ukraine.

The last contact of Uranus with the MC will take place in March 2024 and with the Moon in April 2024.  At that time, the ongoing Pluto will enter the sign Aquarius and will hover in conjunction with Saturn, the significator for the country and its people, from 2024 to 2025. This will likely mark a final dramatic development regarding the integrity of the country.

This is a picture of the ongoing crisis for Ukraine and its people, a cycle that began with the transits of Uranus and Pluto in 2013 and is likely to reach some kind of climax and conclusion in 2025.