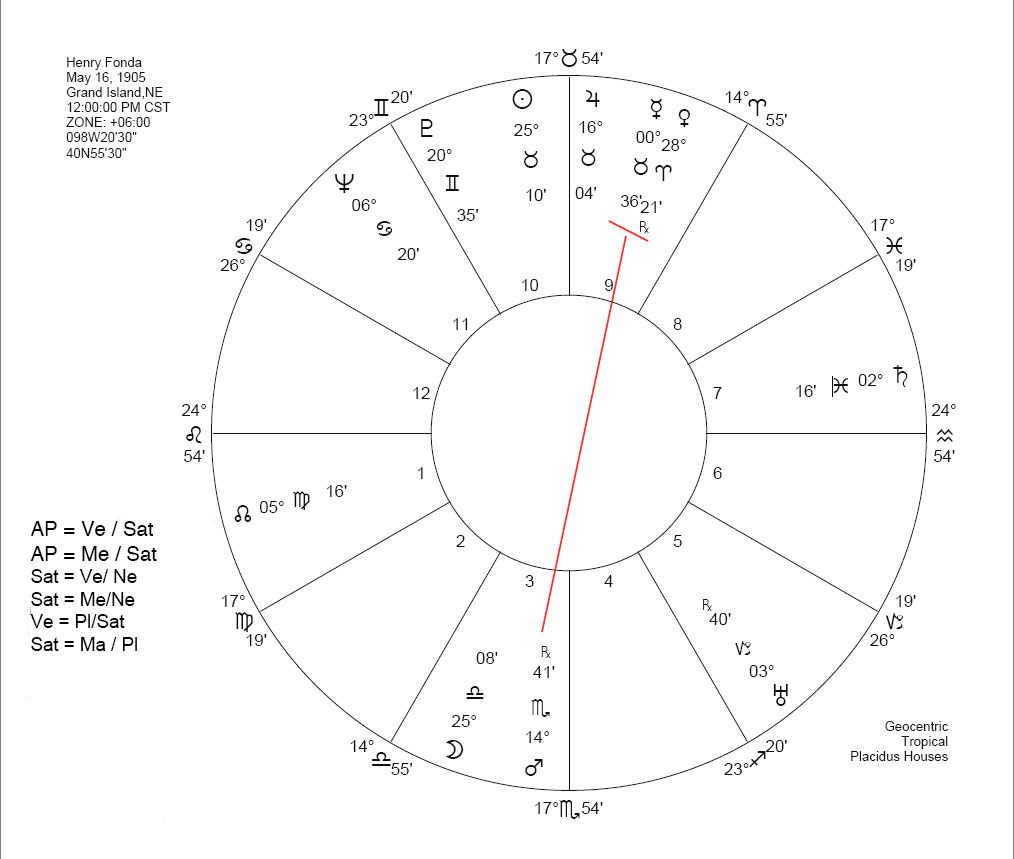 Here we see strong focus on relationships that should, ideally, confirm his personal importance and value. But retrogradation and initially subconscious nature of quindecile makes fulfillment difficult. (We must not forget that aspect configurations picture the conditioning that mostly takes place in childhood and through the interaction with parental figures).

Saturn = Venus/ Neptune , Saturn = Mercury/Neptune and Venus = Pluto/Saturn. Here we have idealistic and romantic outlook under pressure and control. Here is fear and inhibition, cutting one self off from intimacy. One would have to discover in discussion with Henry Fonda how this pattern established in the first place, but it certainly has to do with defenses related to deep self-worth anxiety. Saturn = Mars / Pluto suggests great energy that will be best expressed through hard work within professional ambition.

"He was married for five women, the second of whom committed suicide, and for much of his adult life fought off impulses toward anger and impatience with his children." (from "Henry Fonda" by Kevin Sweeney)

Let's look now at the synastry chart between father and daughter: 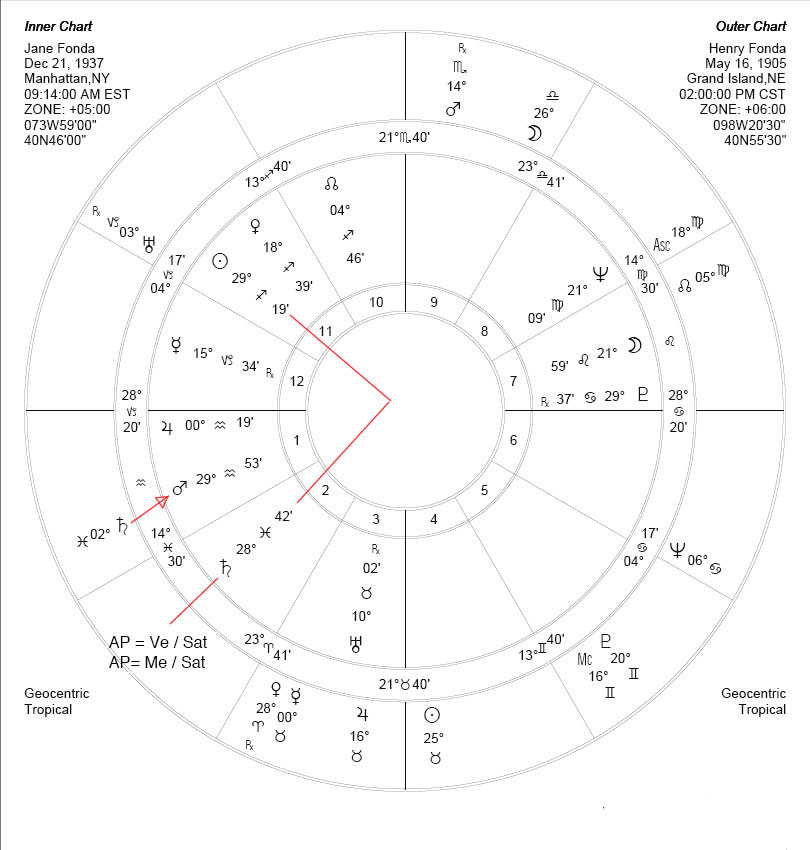 Henry Fonda´s Venus / Saturn and Mercury/Saturn midpoints square Jane´s Sun and conjuncts her Saturn. As it is mentioned previously, Sun -Saturn square pictures her relationship with the father. She certainly felt strongly father's emotional incapability, which affected her self-worth. Sun rules her 7th and is in 11th house, and Saturn rules1st and 2nd - this impact will play out in her relationships.

Father´s Saturn that is, as we have seen, involved in the picture of emotional frustration and difficulty, and as well in the picture of ambition and work, conjuncts daughter's Mars, ruler of her 3rd house - her mindset, her reasoning and judgment. The 3rd House holds also Uranus, the ruler of the 1st, and the picture suggests anxiety about own distinctiveness, not only in the light of troubled early home, but also in the light of famous father.

With this configuration , and having Sun in Sagittarius, we can expect that she will communicate her opinions, and that they become important part of her identity.

In this context of parental impact upon children, I find interesting to quote an article in Washington Post , May 3rd 2005, on occasion of Jane Fonda´s biography: "It's not until Fonda starts working on this memoir that she returns to her mother. In between, she goes from riding horses in Greenwich to the New Wave of filmmaking in Paris, from protests against the Vietnam War (the infamous photo of Fonda in Hanoi) to body sculpting in the fitness studio (the famous home video of Jane Fonda's Workout), from "Barbarella" and "Klute" to "On Golden Pond" (with her Distant Dad, Henry Fonda) and "Coming Home," from the heights of fame to the depths of bulimia, from trying to please her three husbands to finally, as she puts it, pleasing herself."

And also Jane Fonda´s words, from the post titled "Missing My Dad" on her blog: "There have been days during these weeks of rehearsals when I seem incapable of doing the same thing over and over…even twice, never mind for 4 years! I wonder how he (the father) was able to do it. I want to please him…still. Do we ever get over this need to please the parent we were closest to?"